After record low levels of volatility in the US over the past 18 months, the markets have made up for it seemingly on Monday. US stocks declined in early trading, but losses accelerated into the close with heavy selling across the board, but particularly in the energy sector. The proverbial baby was thrown out with the bathwater in the last two hours of trade as investors showed signs of panic. This seemed extreme behaviour to me (with no obvious negative catalysts) and I could be totally wrong here, but one could make an argument that today’s sharp selloff into the US close showed signs of being “climactic”.

Volatility spiked 115% with the VIX hitting 37, and the S&P 500 index closed down 4.1% while the Dow Jones fell 4.6% and the Nasdaq was down 3.8%. The correction in US equity markets has continued and the Dow Jones has now reversed all of this year’s gains then then some. We have been calling for a correction, and the recent downward price action has been swift and sharp. During the session the Dow was down as much as 10% from peak levels, and with markets closing 8% off previous highs, we should see some stability starting to come in. 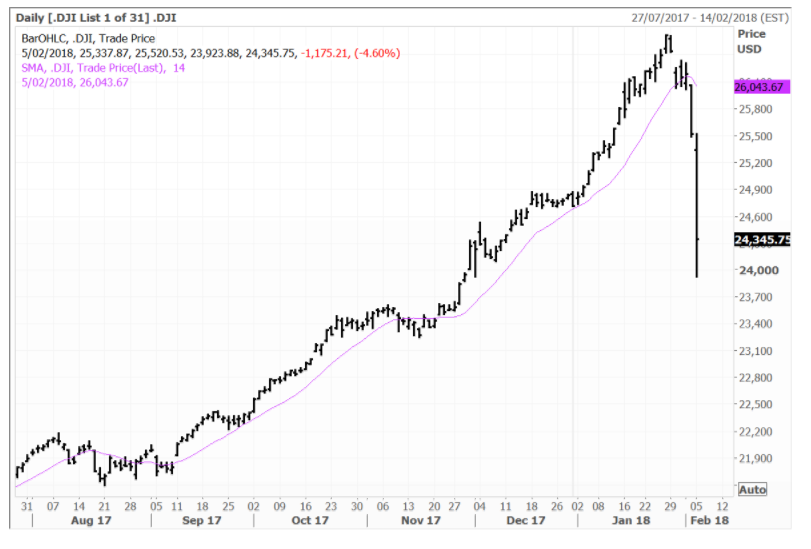 And yesterday already some stock markets have shown signs of “decoupling” from Wall Street’s correction – with markets such as Germany’s Dax (down only 0.76%). China’s Shanghai Composite and CSI 300 were actually up +0.74% and +0.07% respectively, while the Hang Seng and India’s Sensex lost just over 1% and 0.9% apiece. These markets are bound to test the downside today, but it will be interesting to see whether the relative decoupling in performance is maintained. 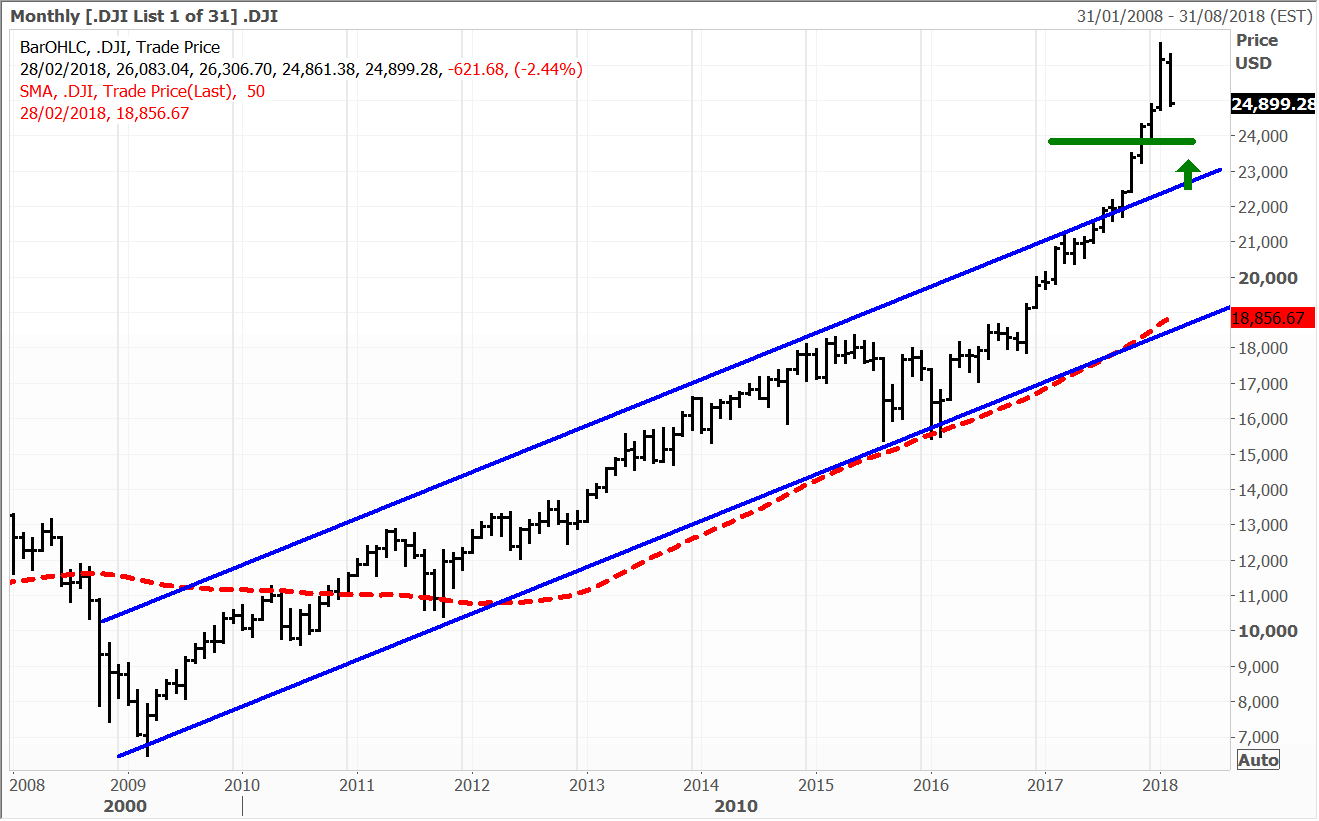 Of all the S&P 500’s biggest sectors, the financials, healthcare and energy faced the steepest declines. Benchmark crude oil prices continued to correct with WTI down 3.1% to $63.43 a barrel. The yield of the benchmark 10-year Treasury note however stabilised at around 2.7% after climbing to 2.86% at one point. The 10 Year yield declined sharply into the US close and we can see the near term oversold conditions corrected as traders bought bonds pushing the yield back down to 2.7%. The bid coming back into bonds will also calm and settle the stock markets. 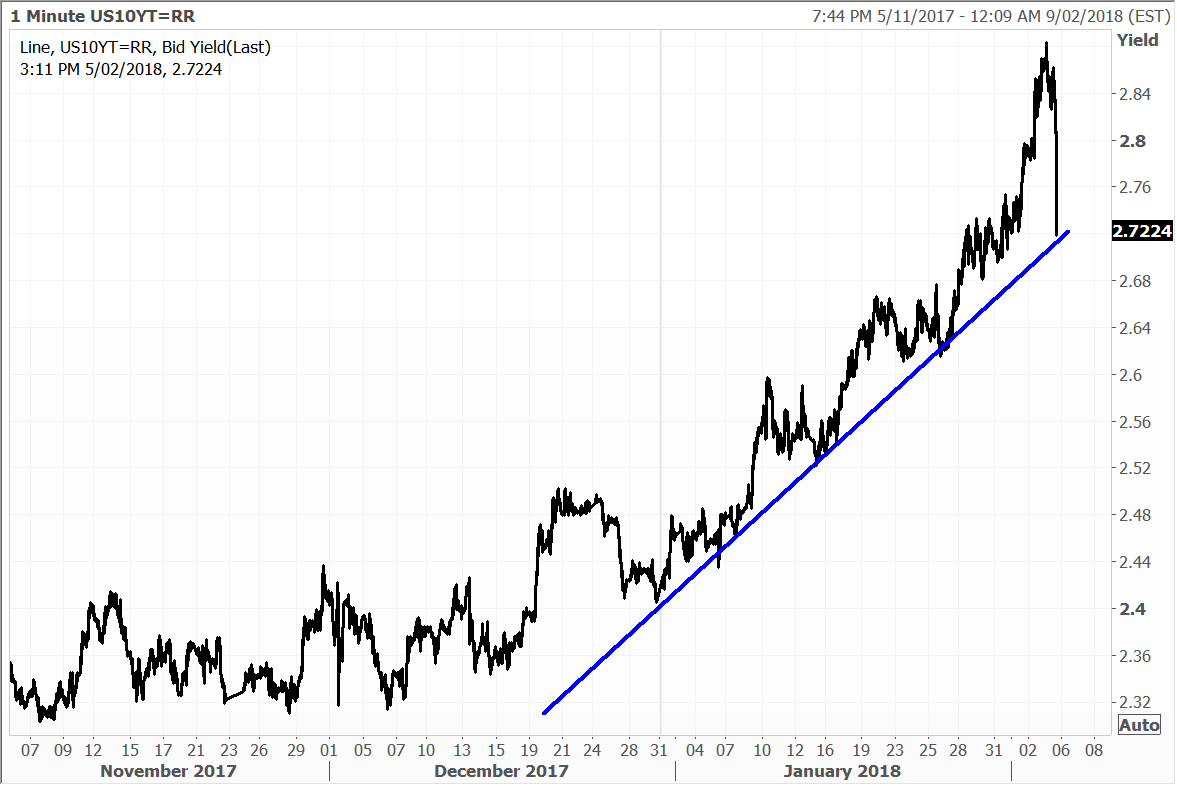 It seems probable that we will see the Treasury market consolidate (albeit in a higher range above 2.6% as I wrote about yesterday) before yields edge up further towards 3%. Whilst the breakout was significant, pointing to a much strong US economy and further rate hikes on the way, the upward move in rates is going to be far from linear.

Apple shares steadied, then drifted into the close, after taking a hit last week, to finish down 2.5%. Wynn Resorts also steadied, and was off just 0.65%. Both stocks are held in the Global Contrarian Fund, the Global Opportunities and the US Managed Account portfolios. Chipmaker Broadcom sweetened its offer for Qualcomm, increasing its bid to $82 per share and saying it represented its best and final offer. All-in the new cash and scrip offer values Qualcomm at roughly $121 billion.

European stocks closed lower for the sixth straight trading session but fared better than others. The Dax lost only 0.76% while Spain and France were down around 1.4% and the Eurostoxx50 declined only 1.26% which points to relative strength. One risk factor that has emerged on the horizon for Europe is the breakdown of coalition talks between Angela Merkel’s party and the Social Democrats.

Amid the sell-off, Telepizza shares finished in the black to the tune of 1.3% and shares of elevator company Kone also eked out a small gain, rising 0.7%. Both companies are held in the European Managed Account portfolios. Telepizza is also held in the Global Contrarian fund.

Among the relatively few large-cap risers on the day, DIY retailer Kingfisher was the biggest gainer, rising 2.3%. That was after reports of Australia’s Wesfarmers conglomerate launching a review of its underperforming UK hardware business. Wesfarmers was earlier seen a major threat to the likes of Kingfisher, which owns the B&Q do-it-yourself store chain. The London-listed shares of BHP Billiton eked out a modest 0.3% gain amid the sea of red.

In Hong Kong, shares of the Macau casino operators were broadly lower on the day, but the latest data from Macau showed much stronger than expected growth in gaming revenue in January. Gaming revenue in Macau was up a whopping 36.4% year-on-year in January, blowing past expectations for a 27% increase and getting 2018 away to a strong start.

I would view any major weakness in the casino operators as a buying opportunity. We hold an overweight position in Wynn Macau, Sands China and MGM China in the Global Contrarian Fund, the Global Opportunities and Asian Managed Account portfolios.

The high-quality producers remain attractive, including the likes of South32, Rio Tinto and BHP, all of which were off over 2% yesterday. BHP of course also has significant energy exposure, and it will be interesting to see what the next steps are with respect to the US shale business. An exit has been mulled, but the timing does not look right near term, and I would expect thoughts here will be put on ice until volatility subsides. 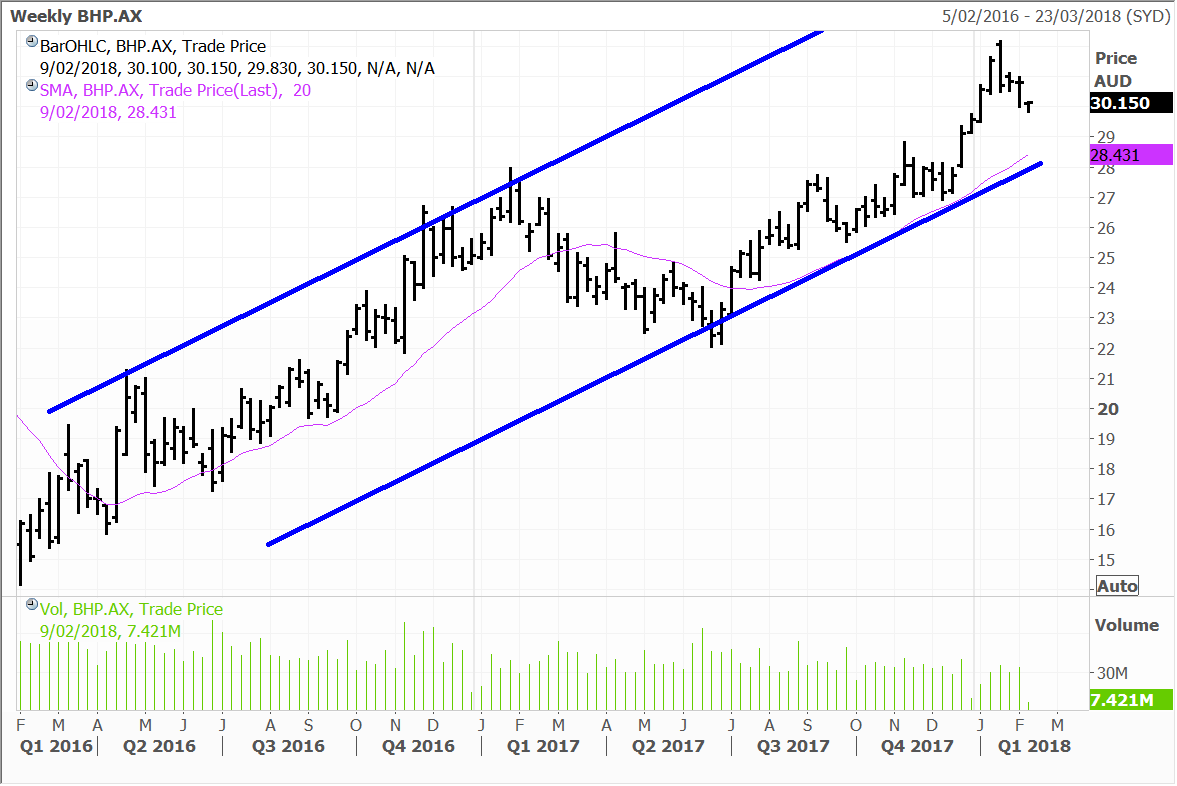 Activist shareholder Elliott Management has also been at it again, calling for the company to review its dual structure, arguing that argues reorganising as a single company in Australia would add more than US$22 billion in shareholder value. The consultancy sees a US$14 billion valuation uplift and US$8.7 billion gained through the release of Aussie tax credits through dividends/buybacks.

Elliott estimates that it would cost less than US$400 million to move to the new structure, which is some way from BHP management’s previous estimate of US$1.3 billion. Still management will have some defending to do to pour cold water on Elliott’s numbers. Never say never, and we may hear the calls get louder, with a ‘Brexit’ from the London exchange a stark possibility at some point.

Praemium lost 10% in yesterday’s session and has also performed strongly for us over the past year in the Global Contrarian Fund and the Concentrated Australian and Small/Mid-Cap managed account portfolios. Part of the tailwind has been macro, with buoyant stock markets driving funds under administration so there would also clearly be leverage on the way down. The company though also have some company specific drivers with its improved positioning in the UK, and launch of an international portfolio offering in Australia. The stock is potentially one to add to once the current correction plays out. 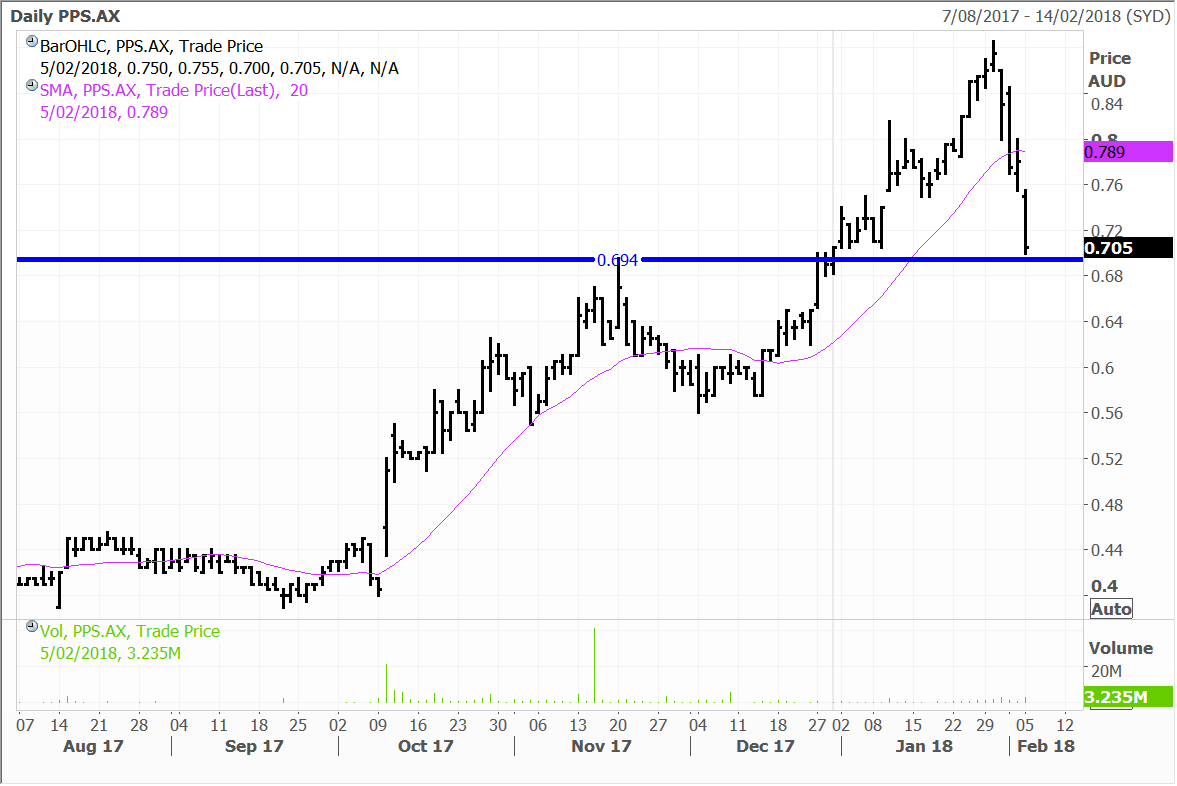 Sony bucked the trend yesterday, rising 1.5% as it released strong third quarter results and again lifted its operating profit guidance for the year. Sony is now forecasting record group operating profit of ¥720 billion (US$6.5b), marking an increase of ¥90 billion from the previous forecast.

Sony also announced a change at the top, with current CEO Kazuo Hirai assuming the Chairman role and the current CFO, Kenichiro Yoshida stepping into the CEO role. We have been impressed with Sony’s turnaround under Mr Hirai and Mr Yoshida has played a key role.

Accordingly, we are confident the good times can continue for the entertainment and technology conglomerate, with the PlayStation and image sensors businesses going from strength to strength. Investors have rewarded the shares, sending them surging 55% over the past year. Sony is a core holding in the Global Contrarian Fund, the Global Opportunities and Asian Managed Account portfolios. 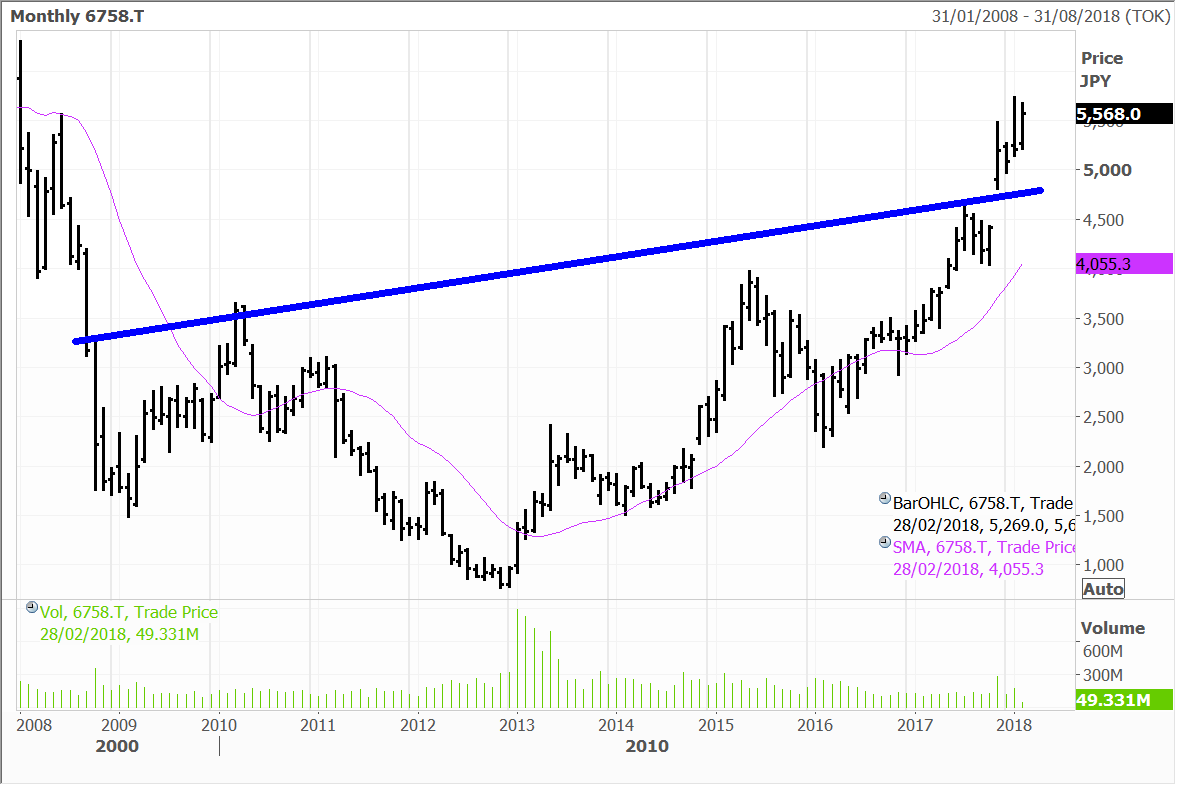