Price strength is of course not confined to iron ore, and the likes of copper, coking coal, and aluminium also finished 2017 with a flourish. The market though yesterday seemed to focus more on the ‘bad” news, and revelations that a tax audit by Mongolian government has seen the ‘request’ for US$155 million from the Oyu Tolgoi copper operation, in which Rio has a 50% stake through Turquoise Hill Resources.

The company is looking to respond to the request, but such a ‘grab’ is something we have seen before, here and elsewhere as governments look to get a ‘piece of the action’ as commodity prices rise. Indeed, we have the same here in Australia with MRT. The Mongolians’ have also had a crack before, with the last dispute in 2014, being settled for around $30 million. I expect it will be more of the same this time around.

In any event, I am staying focussed on what is important at it relates to Rio and the rest of the resource sector, which is rising commodity prices, falling costs and robust production. I expect more of the same on the output from South32 and BHP which report today and tomorrow respectively.

Indian lender ICICI Bank’s American Depository Receipts trading on the NYSE were up by 5.61% on Tuesday after its joint venture – ICICI Lombard General Insurance Company – released its third quarter result, reporting a 5.5% increase in net profit on the previous year to Rs 232 crore. While appearing somewhat muted, this was largely due to a one time write back of a Rs 40 crore tax provision in 2016. Adjusting for this and growth in profit after tax was up by 28% year on year, while Gross Direct Premium Income was up 17.8%.

ICICI Lombard General Insurance Company was established in 2001 as joint venture between ICICI Bank and Toronto based Fairfax Financial Holdings, with ICICI holding a 64% stake. As mentioned yesterday, Morgan Stanley has significantly raised its price target in the stock, citing potential for a 50%+ upside for the stock. We hold ICICI Bank in the Contrarian Fund, Global Opportunities and Asian Managed Account portfolios. 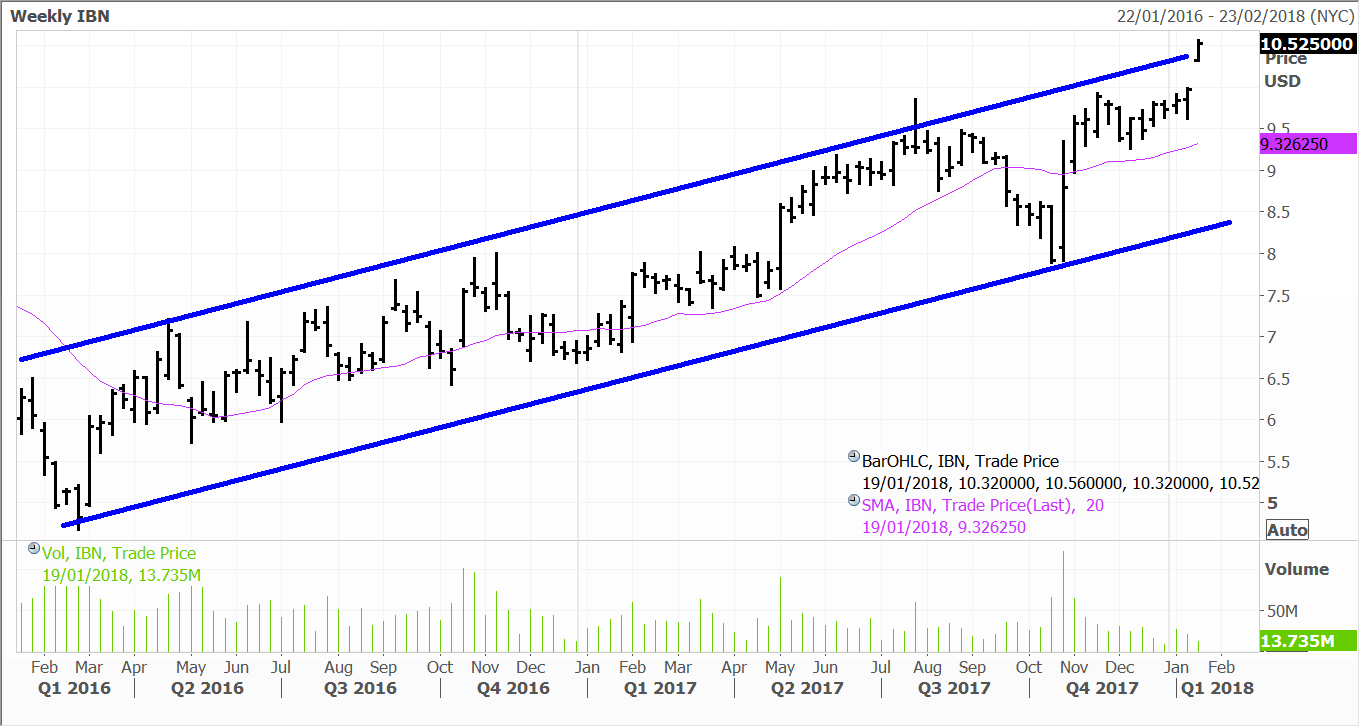 Baidu’s video streaming platform iQiyi has submitted its US IPO application with the company planning to raise US$1 billion. As competition in China’s video streaming business heats up, iQiyi requires sufficient cash to effectively compete with the likes of Alibaba and Tencent, as Baidu shifts its focus to AI related projects. iQiyi is currently burning through cash, reporting a net loss of RMB 2.7bn in 2016. Investors viewed this announcement favourably with the shares up 2.37%. Baidu is a top 10 holding in the Contrarian Fund and is also held in the Global Opportunities, Asian and US Managed Account portfolios. 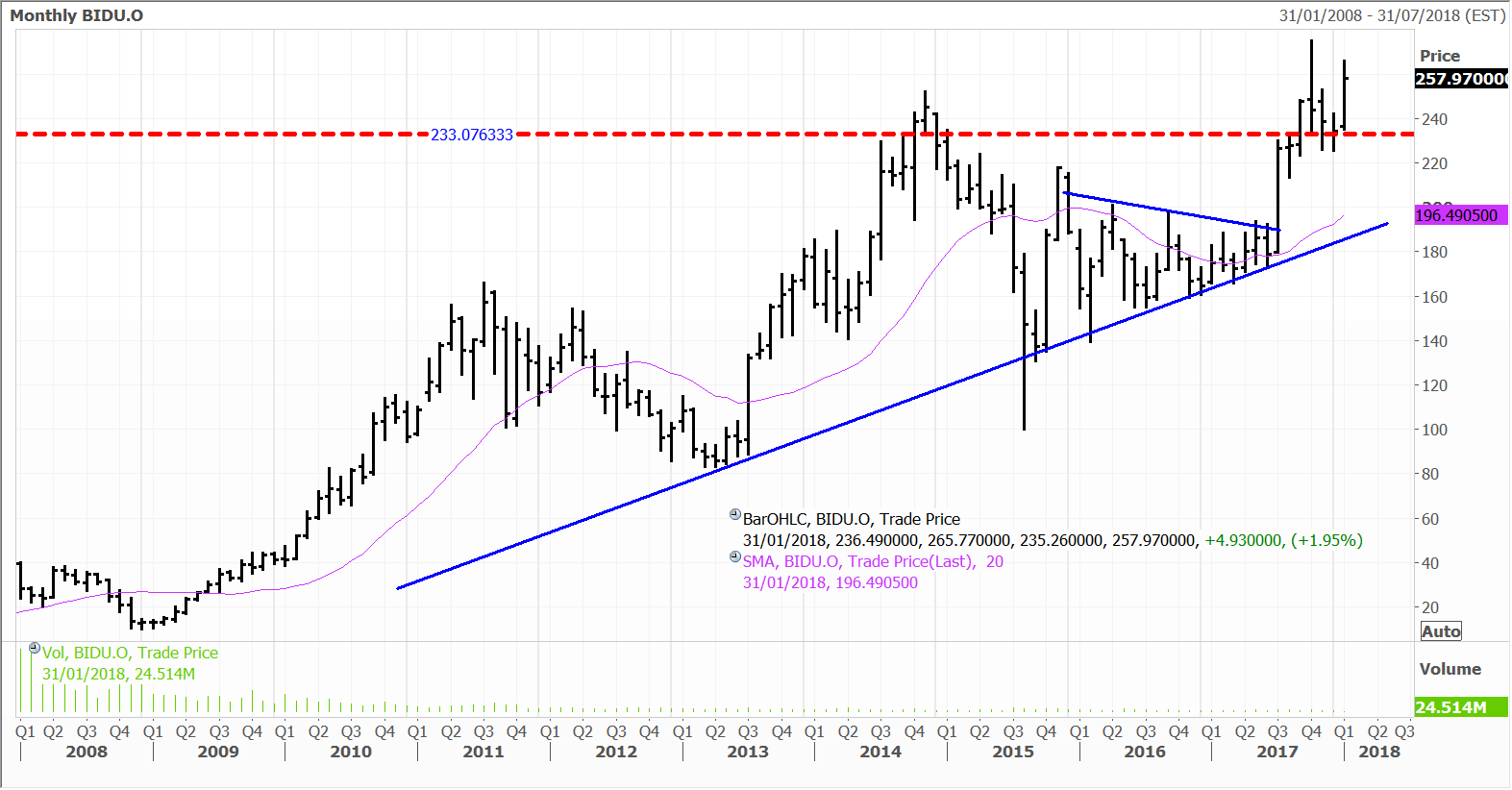 Momentum appears to be snowballing in a couple of sectors we have highlighted this week, including the Hong Kong-listed Macau casino operators and Japan-listed robotics and automation stocks. Both sectors were among the largest gainers again on Tuesday.

On Tuesday, it was Wynn Macau leading the way in its sector, with a 4.1% gain, followed by Sands China, up 2.6% and MGM China, rising 1.9%. We hold these stocks in the Global Contrarian Fund, as well as in the Global Opportunities and Asian portfolios. As we noted in coverage on Monday and Tuesday, several pieces of the puzzle for the Macau casino operators are coming together nicely. Gross gaming revenue for the sector came in 19% higher year-on-year in December, snapping a three-year losing streak.

This week there was reportedly an upgrade of Sands China by Chinese investment bank CICC (China International Capital Corp.), due to increasing mass market demand. Adding fuel to the fire was reportedly a bullish note from brokerage Sanford C. Bernstein, saying this month’s year-on-year growth rate in gaming revenue could be the strongest since July 2017, when gaming revenue surged 29% year-on-year. January 2018 is up against a relatively modest comparison from January 2017, but if Bernstein’s new target range of 22-24% year-on-year growth is achieved, it will be a strong start to the year.

Samsung Electronics Korea-listed shares recouped 3% in trading after facing some selling pressure over the last week as guidance was below expectations and a record fourth quarter profit also narrowly missed. Samsung is a holding in the Global Opportunities portfolio. Given a still attractive valuation and improving capital return characteristics, we would expect to see more support for the shares – as we saw yesterday – if there is any further weakness.

Sector in Focus – Robotics and automation

Also among the biggest movers on Tuesday in Asia were robotics and automation stocks. Many of the key players in this area are Japan-listed and THK, a components supplier to the automation and robot industry gained 3.5%, while robotics pioneers Yaskawa Electric and Fanuc surged 4.8% each. All three stocks are held in our Asian portfolios and Fanuc is a holding in the Global Contrarian Fund.

Providing an adrenaline shot for all three exposures was a strong print for machine tool orders for Japanese producers in 2017. Machine tool orders surged 31.6% in 2017 to ¥1.64 trillion (~US$14.8 billion) and set a new record for the first time in a decade according to the Asia Nikkei Review. This was spurred by brisk demand from abroad and solid demand domestically. Machine tool orders are a strong leading indicator for the automation and robotic companies.

The ¥1.64 trillion in machine tool orders is roughly four times higher than the annual machine tool nadir of ¥411.8 billion reached in 2009 on the heels of the global financial crisis.

As the Asia Nikkei Review reported, overseas demand, spearheaded by China, was the primary driver. Overseas demand edged over ¥1 trillion for the first time since 2014 and at ¥1.01 trillion, marked a 41.2% increase from 2016. Figures released by the Japan Machine Tool Builders’ Association are still preliminary.

December orders were strong and surged 48.3% year-on-year to ¥165.8 billion, setting a record for a month. Foreign orders jumped 55.6% year-on-year in December to ¥102.5 billion. Domestic orders were up 37.8% to ¥63.3 billion. December was the 13th consecutive month of year-on-year growth. Orders are expected to grow solidly again in 2018 and this was the impetuous for the strong move in the likes of THK, Yaskawa and Fanuc.

Fanuc is considered the premium robotics expert and its distinctive yellow robots are a common sight in factories around the world.

Some of Fanuc’s broad robot range: 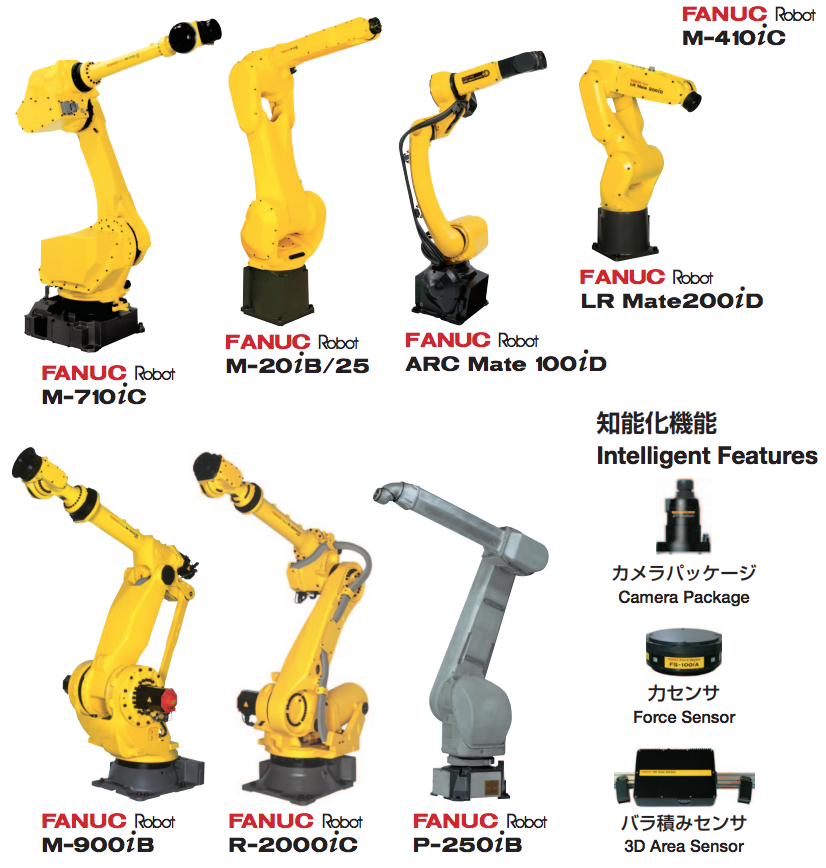 Fanuc crossed a major milestone late last year having sold its 500,000th robot. Mike Cicco, president & CEO, FANUC America said, “Automation and robotics are key drivers of manufacturing competitiveness,” and added, “More companies are using automation to overcome inefficiencies, lower costs, increase productivity, and gain market share. Having sold a half million robots is a key milestone for FANUC, and we’re looking forward to expanding our capabilities to keep pace with the growing demand for automation.”

Following a solid set of first quarter numbers, Fanuc maintained its momentum in the second quarter. A change in the product mix and higher volumes led to a rise in gross profit margins. Operating incomes surging 55.8 percent to ¥56.9 billion. The solid performance in Q1 and Q2 was far ahead of management forecasts and prompted management to up their guidance forecast. Operating margins for the quarter increased to 31.8% from 28.2% last year and have been recovering since hitting a cyclical low of 25.0% back in 3Q16.

Fanuc practises what they preach by using robots and factory automation (FA) in their own factories and this combined with a focused business model has given the company a superior cost advantage over peers.

In Japan the strength of the economy has led to a steady pick-up in inflation which has been trending up for the entire 2017, albeit far off from the Bank of Japan’s (BoJ) 2% target but gradually getting there. After all, the annualised pace of inflation in Japan accelerated from 0.1% to 0.8% by the close of the year, signalling the effectivity of BoJ’s policies. IHS Markit economist Joe Hayes commented that “… the inflationary trend in output charges was extended to a full year. Selling prices were increased by manufacturers at the fastest pace since July 2014.”

The Cabinet Office’s expectations for Japan’s economy peg an annualised growth of 2.5%, one of its fastest pace of growth in years. The improving prospects for the economy may signal the end of the BoJ’s Negative Interest Rate Policy (NIRP) as the Governor, Haruhiko Kuroda, changed his tone last November stating that due to criticism from banks, which are calling for higher interest rates across the yield curve, the BoJ is now “very mindful” of their impact. In addition, he even made allusions to “reversal rates” which could edge away from monetary stimulus earlier than expected.

In line with this, we see the yield curve in JGBs (Japanese government bonds) getting steeper. Note that as economic prospects improve, bonds become less attractive as investments relative to equities which in turn would lead to a shift in allocation causing yields to go up as bond prices go down.

There is also an economic theory that support this as the steepening of the curve goes hand in hand with economic growth. The chart below graphs the yield spread versus GDP lagged by one year and shows how close Treasury yields track GDP growth. 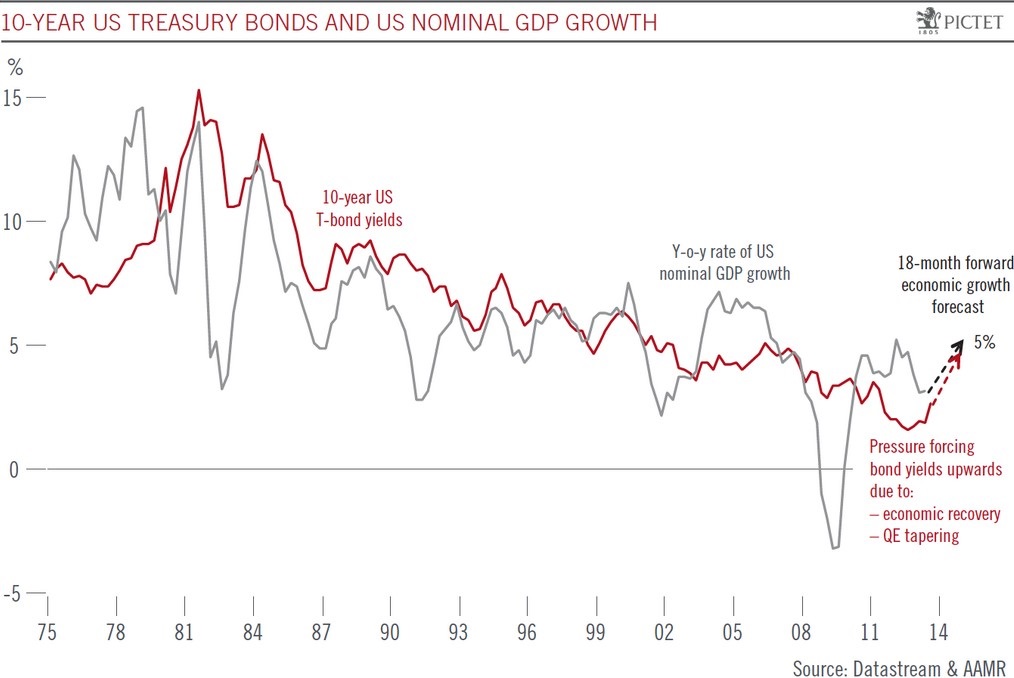 Given the negative deposit rates and 10-year JGB yields which were fixed at 0%, no surprise that banks have struggled to make lending profitable. We see the BoJ adjusting the rates as the NIRP is impacting the banking industry, while the disruption is undermining their monetary policy efforts.

As such, the above factors combined would mean that the BoJ would eventually end the NIRP in the year and this will be a major boon for banks as their business model involves borrowing money in the short term (CASA) while lending money in the longer term, with positive rates and a steeper yield curve pushing bank sector profits.

Besides, the signs are already there as seen in the chart below. Looking at the yield curves on JGBs with maturities between 10-20 years are already much steeper than last year while the bonds with longer maturities are set to follow suit. 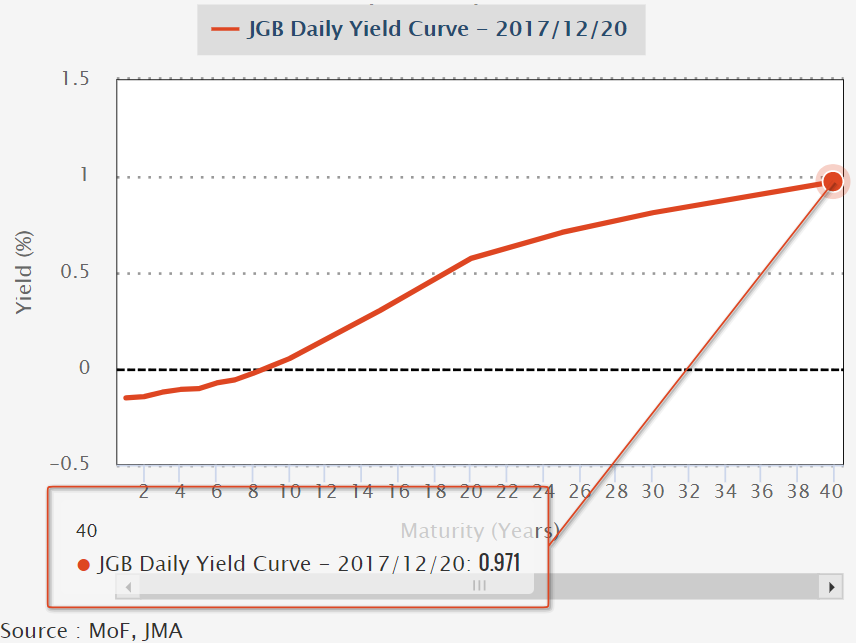 Also, the subsequent increase in earnings expectations in banks would mean that Japanese Banks shares like the ones in covered by our Asian Equities team (Mitsubishi UFJ, Sumitomo Mitsui Financial, and Mizuho Financial Group), could see an explosive rally. In addition, we see the rest of Japan Inc. benefitting, as improved earnings expectations push the Nikkei well over 25,000. 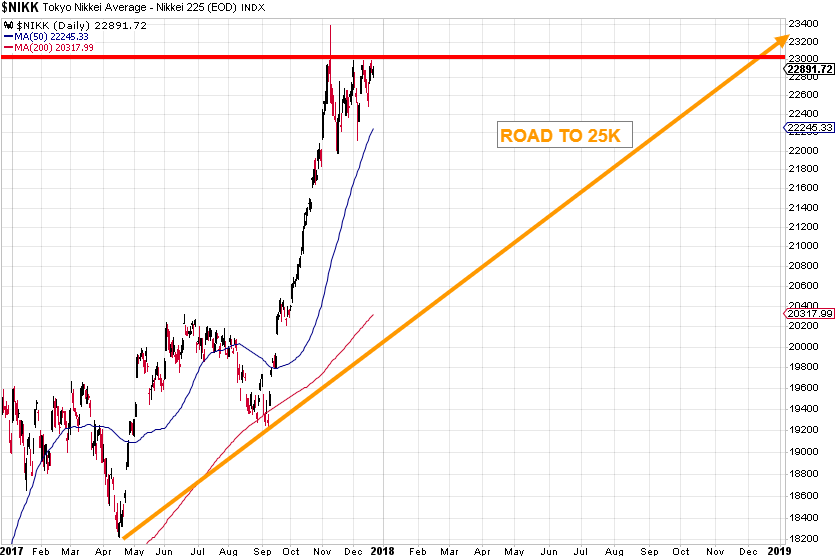