Japan has reported third quarter economic growth of 1.4% versus forecasts for 1.3% and 2.6% growth in the third quarter. On a quarter-on-quarter basis growth came in at 0.3% versus 0.6% in the second quarter. Japan has now reported its seventh consecutive quarter of economic growth with this being the longest streak since the turn of the century. The re-election of Shinzo Abe will also support the momentum in the medium-term.

The TOPIX has corrected sharply (see below) after encountering historical resistance, but support should soon be found after what was a very strong quarterly reporting season and against a rapidly improving economic backdrop. Japan is shaking off nearly 3 decades of deflation and recession, so any “sea change” was bound to attract some skepticism. This is after all the very definition of what bull markets are made off. And history is littered with precedent. 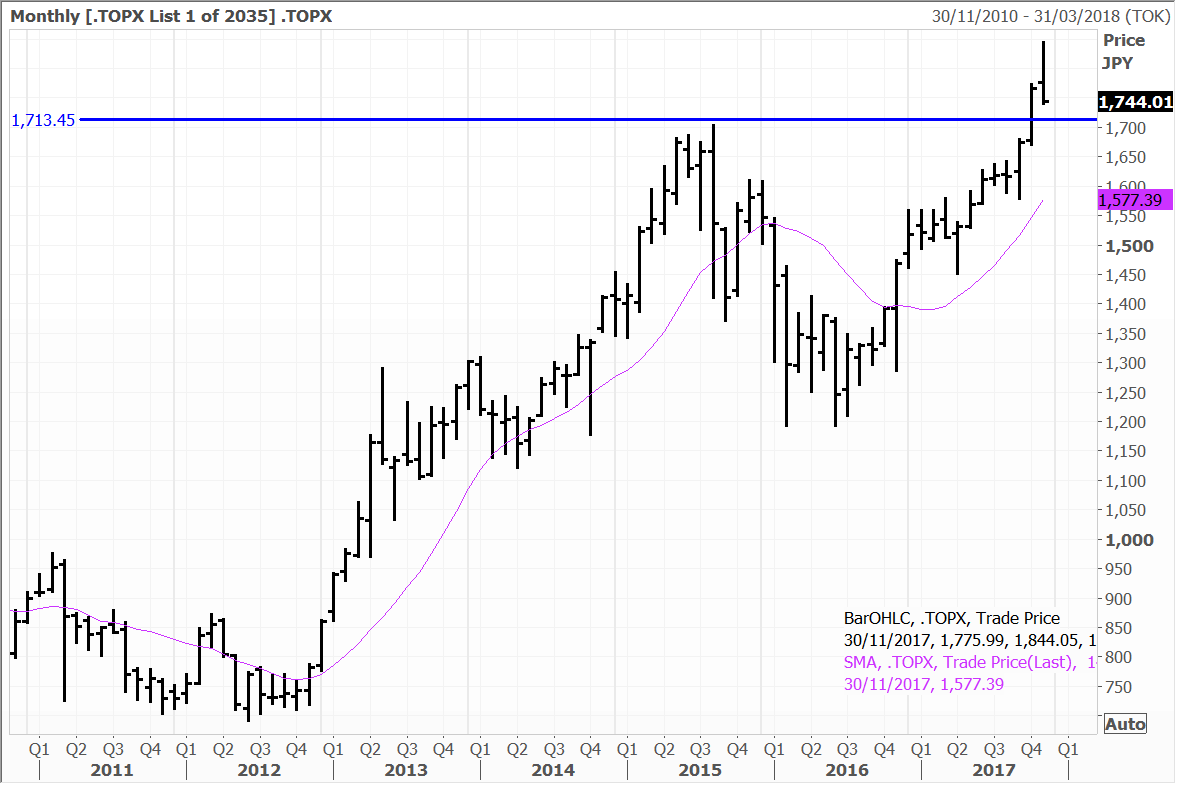 For a decade after the 1929 crash, investors rushed to short the market after every extended run to the upside in the folly of capturing the next crash. But as I like to say, the last place to “find a crash” is immediately after one has just occurred. In Japan’s case, it will take some time for attitudes, perception and the psychology of the market to change, but change it will. The latest correction in Japanese stocks therefore opens a buying opportunity in my opinion.

The energy sector was also lower on Wednesday, and while oil is also likely to correct lower, I don’t think the market has necessarily topped out. OPEC does hold more than a few cards, but global demand is recovering strongly, particularly in emerging markets. We are also many decades away from a time when the planet is not heavily reliant on fossil fuels.

Any suggestion that Shell selling out of Woodside symbolised the ‘top’ of the energy market is also misguided in our view, but does highlight Shell’s very good sense of timing. Shell has a wider divestment programme and has been looking to exit Woodside and other stakes in listed companies for some time. The oil major has a clear preference for direct interests in ventures themselves, and is not shirking on investment here. 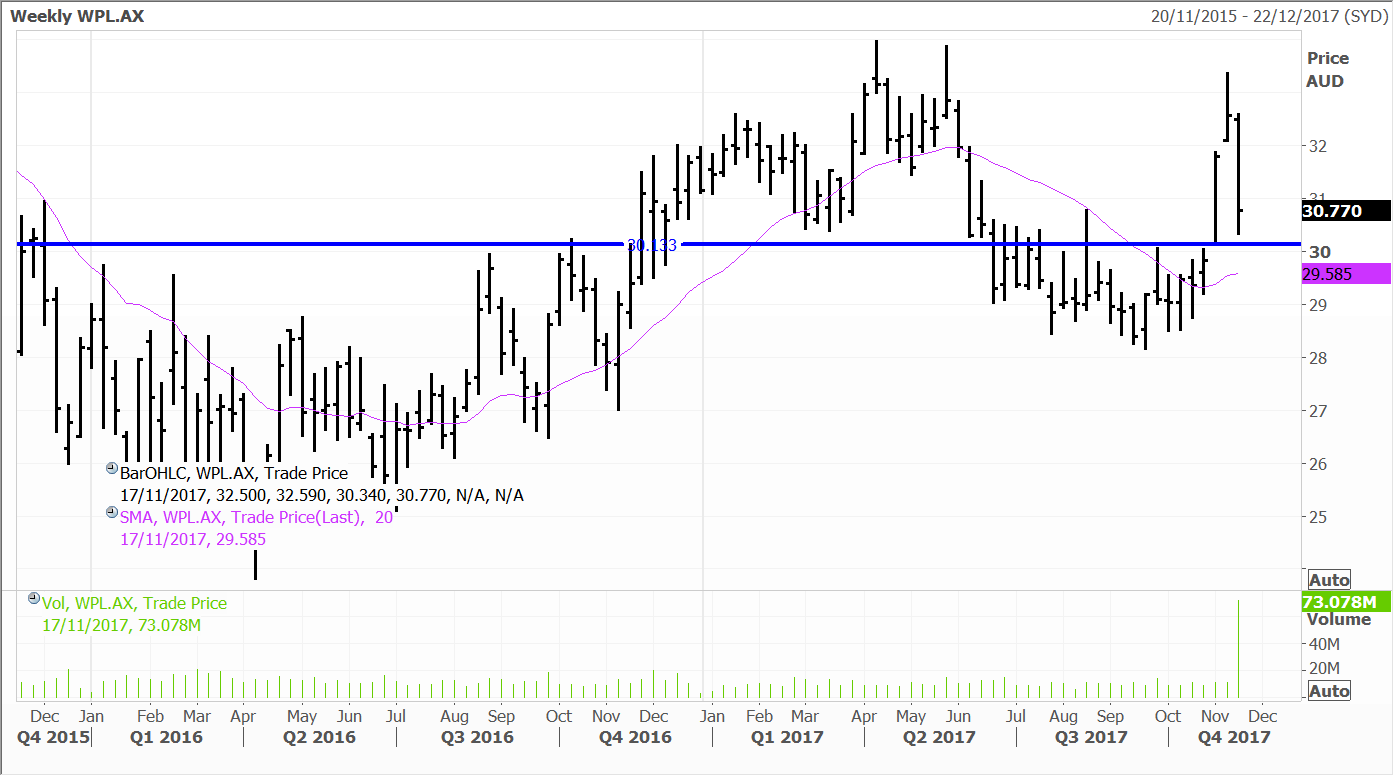 On slightly similar lines, the front page of today’s AFR also reports that Santos is in the sights of a predator. The article recounts that “Big American oil is preparing to make an $11 billion all-cash takeover offer for Santos as the next step in a play for regional and global relevance in rapidly reforming liquid natural gas markets.”

The reports wouldn’t surprise, with Santos clearly vulnerable. The shares have recovered recently, but a huge amount of shareholder value has been lost in recent years. The fact the company’s balance sheet has been repaired following a capital raising arguably reduces the downside risk from here for a strategic investor who is optimistic about energy prices longer term. A $5.30 offer price might not quite cut it, but the final bid might not have to be too much higher given what many shareholders have had to endure.

Also coming onto the block will be BHP’s shale assets which is reported to be working on deals to sell around five shale fields, if not the entire shale business. Whilst BHP has copped much flak for its investment in shale I think the assets would be attractive to a pure play US shale company given the lack of quality assets available, and the longer term demand story.

After a sharp rally in Asian stocks over previous weeks the market stopped to take a breather on Wednesday, with investors choosing to lock in some gains in the run up to the end of year. In Japan stocks were sold off across the board with Sumitomo Chemical, Mitsui Fudosan and Mitsubishi Corp down 3.39%, 3.56% and 2.54% respectively.

One company that bucked this trend however was Japanese Life Insurer Dai-ichi Life Holdings which reported its interim result to 30 September. Revenues were up 5.5% on the previous year to ¥3.36 trillion and were given a boost by stronger financial markets. Recurring profit was down by 3.7% to ¥212.19 billion and the company raised its full year forecast profit by 0.2% to ¥426 billion.

Dai-ichi continues to shift its product mix away from Savings and Annuity products towards Protection products which now constitute 80% of its book, compared to 39% a year ago.  The acquisition of United States Warranty Corporation and a long-term policy block from Genworth Corporation were the catalysts for this sizeable transition and follows on from the acquisition of US Life Insurer Protective Life for $5.7 billion in 2015.

Japan is the second largest life-insurance market behind the US, with about $400 billion in annual premium income. The industry has been hit hard by diminishing investment returns over recent years with the Bank of Japan pursuing a negative interest rate policy. This has prompted insurance companies to look overseas to plug the earnings gap and has been a key reason behind M&A in the sector. We hold Dai-ichi Life, Sumitomo Chemical, Mitsui Fudosan and Mitsubishi Corp in the Contrarian Fund. 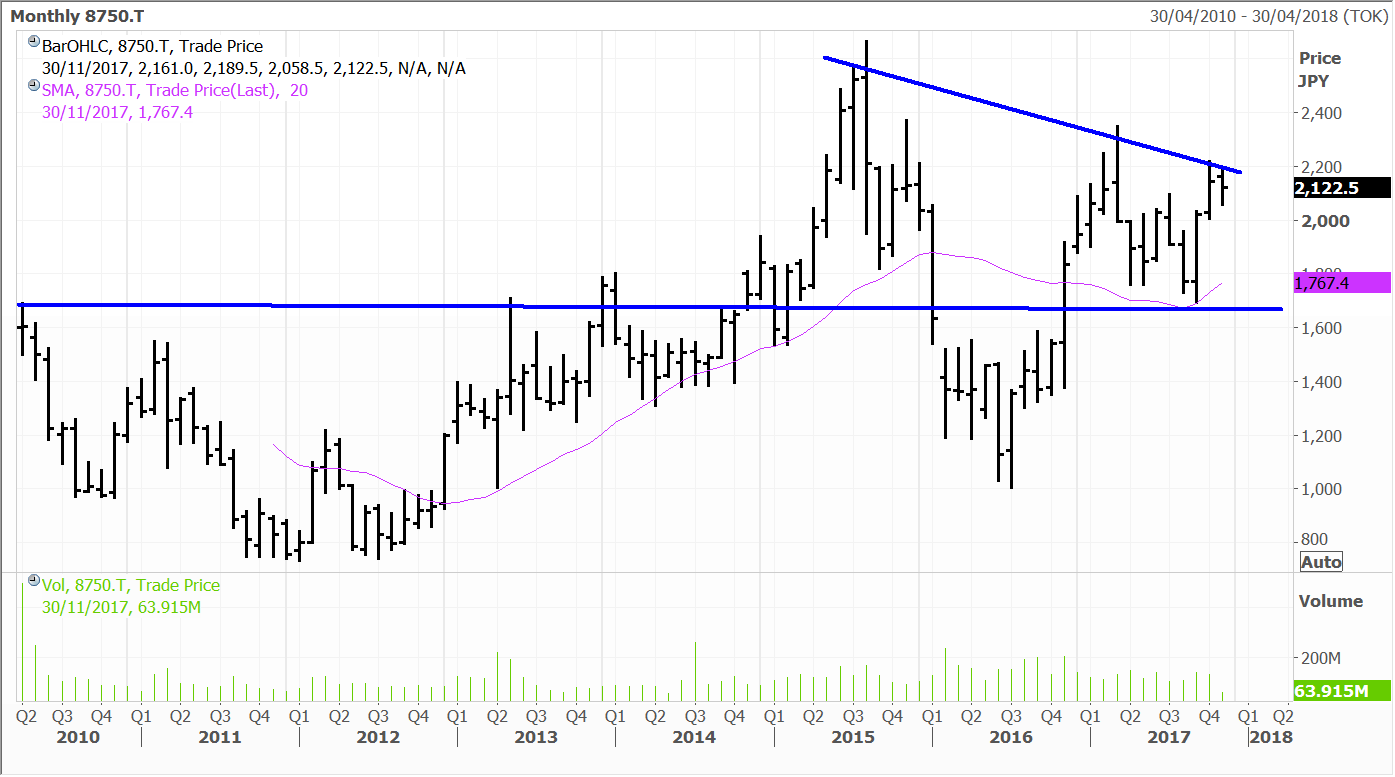