The big news on Tuesday was in the financials with the announcement of a change at the top at QBE Insurance. CEO John Neal is being replaced (from 1 January 2018 with a four month transition) by Pat Regan, who is currently the CEO of the group’s Australian and New Zealand operations, and was formerly the CFO. The market was receptive to the news, with the shares jumping 2.5% during the session.

We hold QBE in the Global Contrarian Fund, and I think that the appointment is very positive and not because John Neal did a bad job during his tenure. Indeed, he was instrumental in reshaping and streamlining QBE which became unwieldly, inefficient, and something of a mess under his predecessor following a spate of acquisitions. From a business perspective, QBE is in a much better position than when John Neal became CEO in 2011. 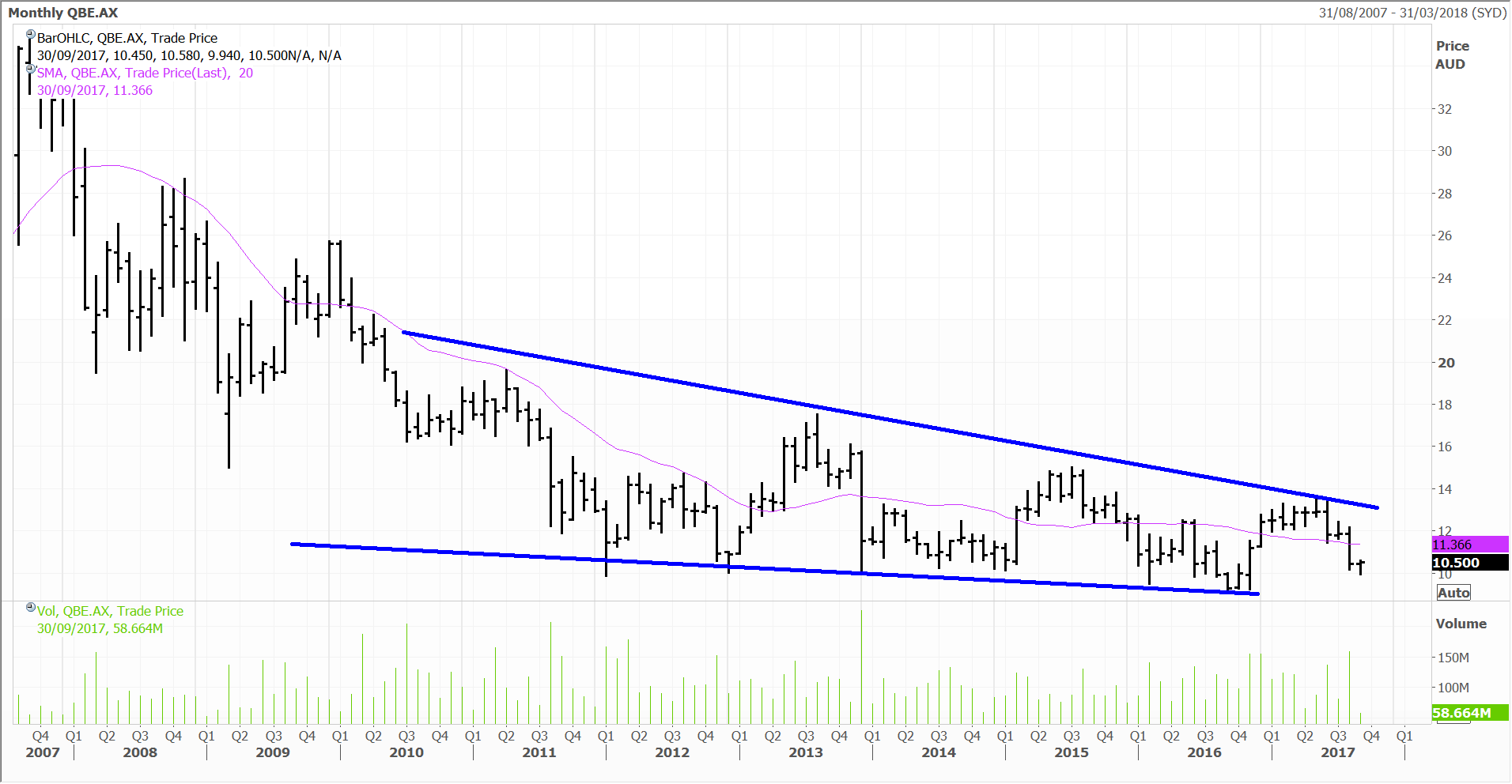 The fact of the matter is though that QBE’s share price is lower than when Mr Neal took over, and that is a key yardstick for many. While the shares are deeply oversold (in my view) with QBE now valued at a significant price to book discount compared to peers, the reality is that in recent years the company has been plagued by continued earnings downgrades, write-downs, and out of the blue issues from various business units.

The most recent warning over losses in emerging markets has clearly proven to be ‘the final straw’ with shareholders, and despite the fact the units which account for the bulk of revenues are performing well. QBE has lost trust (again) with the market, and a new CEO is probably a good step in the right direction to restoring it.

Mr Regan certainly fits the bill for turning around QBE and addressing weak areas within the business in my view, having led a strong recovery in the Australian & New Zealand Operations. As a ‘numbers’ guy, the former CFO clearly knows what makes QBE ‘tick’, and he will no doubt be focussed on maintaining a robust balance sheet, while also looking towards capital enhancing initiatives.

A management change is also afoot at Ardent Leisure, with the announcement yesterday that the CEO of the company’s Main Event unit, Charlie Keegan, is resigning after 11 years at the helm. Mr Keegan will leave November 24, but will stay on with Ardent for another 12 months in a consulting capacity to “facilitate an orderly transition to a new chief executive of the business.”

A search is on for a replacement, but the timing may also be appropriate with Mr Keegan having capably taken Main Event from 6 to 38 centres, but it is an altogether different proposition to grow the footprint nationally, and also, as there have been some teething issues with the push outside of Texas thus far. We would therefore be most encouraged to see a CEO appointed who has handled the scale of expansion which Ardent is planning.

The miners had a positive day on Tuesday, with Rio and BHP up 1.9% and 1.2% respectively.

South32 was though the standout, with the stock gaining 3.9% on the day and breaking out to the upside (see below). We hold all three stocks across our model portfolios. Strength in iron ore proceedings helped once again, and I remain of the view that a ‘scramble’ by instos to readdress their portfolio weightings upwards in the sector is going to continue to play out – particularly when you consider that their pricing models were likely forecasting much lower commodity pricing a few months ago (many for instance were predicting $50 on iron ore, when it is currently $75).

South32 decisively broke out to the upside on Tuesday 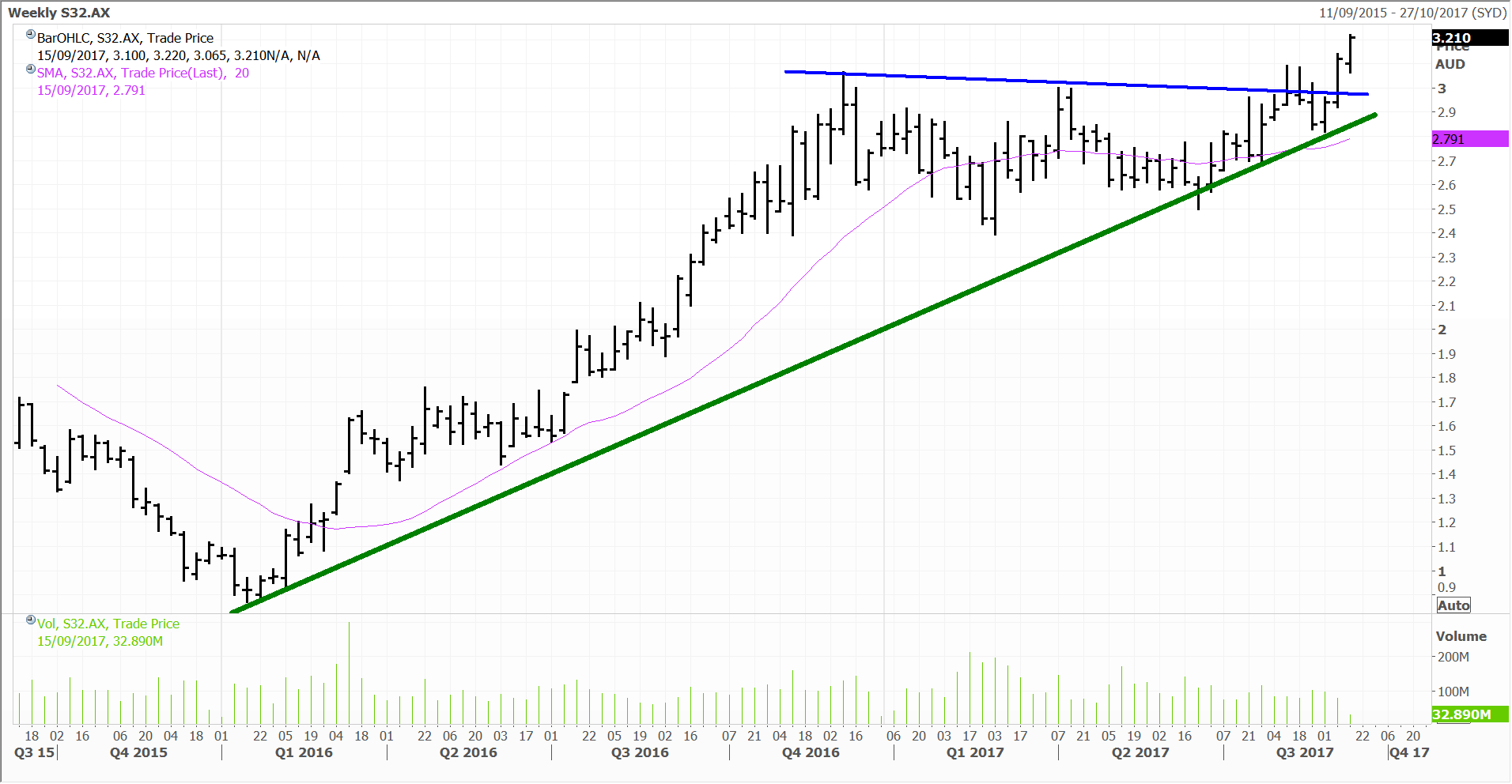