Wall Street climbed on Monday in what was a relatively quiet day with few news catalysts. Apple continued to rally for a sixth straight day of gains following the purchase by Berkshire Hathaway last week of another 75 million shares. Warren Buffett told CNBC on Monday, “I’d love to own 100 percent of it.” The tech-heavy Nasdaq led the major US indices on Monday, gaining 0.77% followed by the Dow advancing 0.39% and the S&P 500, which gained 0.35%. The Dow Transports declined 0.08% while the Russell 2000 lifted 0.85%.

Oil surged to new medium term highs with WTI pushing above $70 and Brent lifting to $79 at one point on Monday, but the rally faded into the close. US President Donald Trump tweeted that on Tuesday he would announce his decision on whether to withdraw from the Iran nuclear deal. Precious metal prices were steady while the Dollar Index managed to push higher.

Worries over inflation, interest rates, tariffs and geopolitical tensions have pushed sentiment into negative territory since the correction began back in February, but as I wrote yesterday, I continue to see this as setting the foundation for an extension of the rally into May which goes against convention. Historically, May has been one of the worse performing months in the year, but with the corrective selloff coming early and with the prospective multiple for the S&P500 approaching 15X for 2019 – with one of the best earnings seasons on record just concluded – the market could well put in another solid result this month.

Precious metals miner Coeur Mining gained 1.4%. Walt Disney shares ticked up 1.3% and we touch on the entertainment giant which is due to report earnings this week in a bit more detail later. Shares of Indian bank ICICI closed 4.2% higher after its latest quarterly report. Profit was down sharply due to the recognition of higher bad loans, but investors are betting that this is clearing the decks for higher profits down the road.

In other trading, Volkswagen shares recovered 1.4% after sliding 3.2$ last Friday after former CEO Martin Winterkorn was charged in the United States over the diesel scandal. Fresh news reports state that the new CEO Herbet Diess has been given a rare US ‘safe-passage’ pass. That allows him to travel the world without any worries that he would be detained in connection with the ongoing diesel-rigging prosecutions in the United States. Luxury automaker giant BMW advanced 0.6%. Also in Germany, Heidelberg Cement shares dipped 0.4%.

In Hong Kong energy shares were strong, while technology stocks were soft. Oil and gas supermajor CNOOC surged 3.1% and telecommunications firm China Unicom gained 2.3%. The Macau casino stocks finished higher as investors returned to the buy side after recent profit taking. Sands China, MGM China and Wynn Macau gained between 0.4% and 2.2% on the day.

On the technology side internet conglomerate Tencent Holdings closed 0.7% lower, but Sunny Optical bucked the trend in the sector and gained 2.4%.

There is little question that gains in the ASX200 since early April have been led by the resource sector and the lower A$, but this has been the case since early 2016 when commodities bottomed. BHP has been the poster child for the rally, and yesterday the shares added 1.5% to close at $31.95, the highest level in more than four years. The bid was firmly in on BHP yesterday due to oil price strength, but commodity prices generally have been pushing higher for some time. 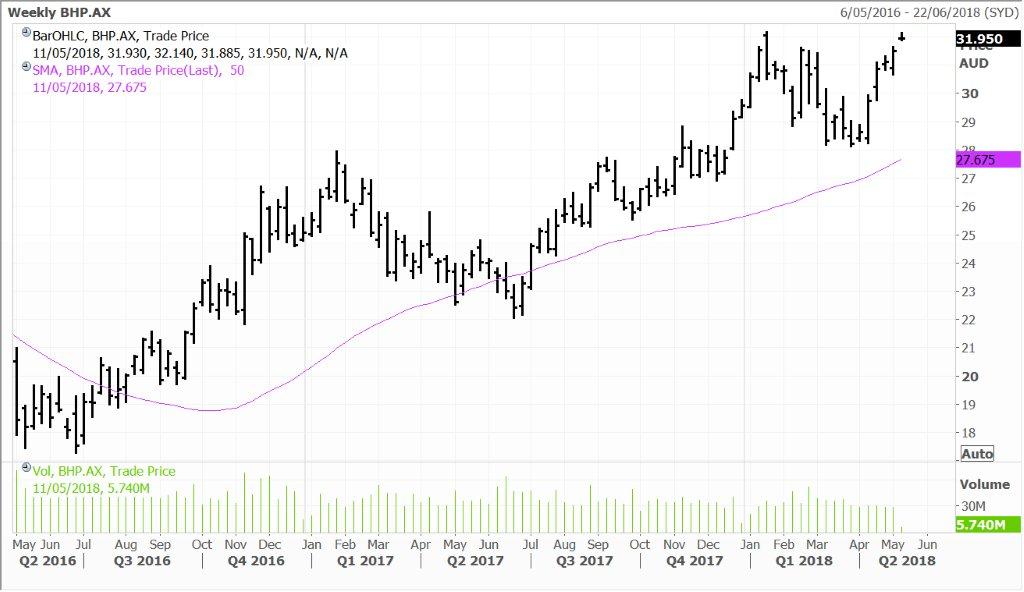 Other diversified commodity producers are performing, including Rio and South32 which added 2.4% yesterday. Several brokers moved to a sell on the latter around the March lows, but I wouldn’t be surprised to see some upgrades come through. We remain positive on the sector, and continue to overweight the large diversified producers in our portfolios.

Netflix might rule the TV Streaming waves for now, but Disney dominates the global cinema box office. Disney rallied again in trading on Monday ahead of its fiscal second quarter report due after the closing bell Tuesday EST. Regardless of how the short-term results are interpreted, Disney CEO Bob Iger is laying the groundwork for a big future for the House of Mouse.

The media and entertainment giant’s latest Marvel blockbuster, Avengers: Infinity War, is blazing new records and cementing the company’s domination of the global box office. The superhero extravaganza hit $450 million in ticket sales domestically in just nine days and crossed the $1 billion mark worldwide in a record 11 days. And that was before it opens in the Chinese market, the world’s second largest.

Infinity War is the third Avengers movie and the tent-pole movie in the Marvel Cinematic Universe’s (MCU) Phase Three, which will be concluded with a yet untitled Avengers 4 movie due to hit cinemas about this time next year. In between now and then the legions of Marvel fans can look forward to Ant-Man and the Wasp and Captain Marvel, with the latter to be the first female-led Marvel film.

Phase 4 of the MCU will kick off after Avengers 4 and begin a distinct new period for the Marvel timeline according to Marvel boss Kevin Feige. Showing how wrong Wall Street can get it, when Disney agreed to buy Marvel in 2009 for $4.2 billion, many analysts viewed it as hugely overpriced. But Bob Iger recognised the value of the treasure trove of IP (intellectual property) and instead it is looking like one of best bargains in recent history within the industry. Infinity War is the sixth movie to hit $1 billion at the global box office, marking it 17 for Walt Disney out of a total of 34 to achieve the feat.

The bottom line is global audiences have flocked to Marvel movies and there are no signs of fatigue. As any Marvel fan will chew your ear on for hours, Marvel has a vast array of characters that have entertained comic fans over the years, most of which are yet to grace screens.

We believe the Lucasfilm acquisition is also going to be viewed as another astute move, with Disney already expanding that universe commercially. As I wrote yesterday, the presales of Solo: A Star Wars Story have outsold presales of Black Panther, by two times in the first 24 hours of their release on Fandango, an American ticketing company. The movie hits US cinemas on May 25 and is the Hans Solo origin story, directed by Ron Howard.

The Fox acquisition is a transformative one and a successful completion would cement Disney’s position as the entertainment business with the best portfolio of in-house content.

The Parks and Resorts business is a strong and steady performer and the newish Shanghai property has got away to an impressive start. The ‘halo’ effect from the resort is likely to significantly boost Disney’s business in China over the next few years. We believe we are already seeing this with recent Disney animated movies showing strong performances at the Chinese box office.

Disney is converging within a triangle trading range which are typically resolved with a significant move out of the range. I believe in Disney’s case the stock price is going to break to the upside with the catalyst being a better than expected earnings outlook and more definition around the TV streaming plans. Netflix has a similar market cap to Disney, yet substantially less in the way of earnings.

Morgan Stanley recently placed Disney on its high conviction buy list with a bull case price target of $160 which I think is achievable. 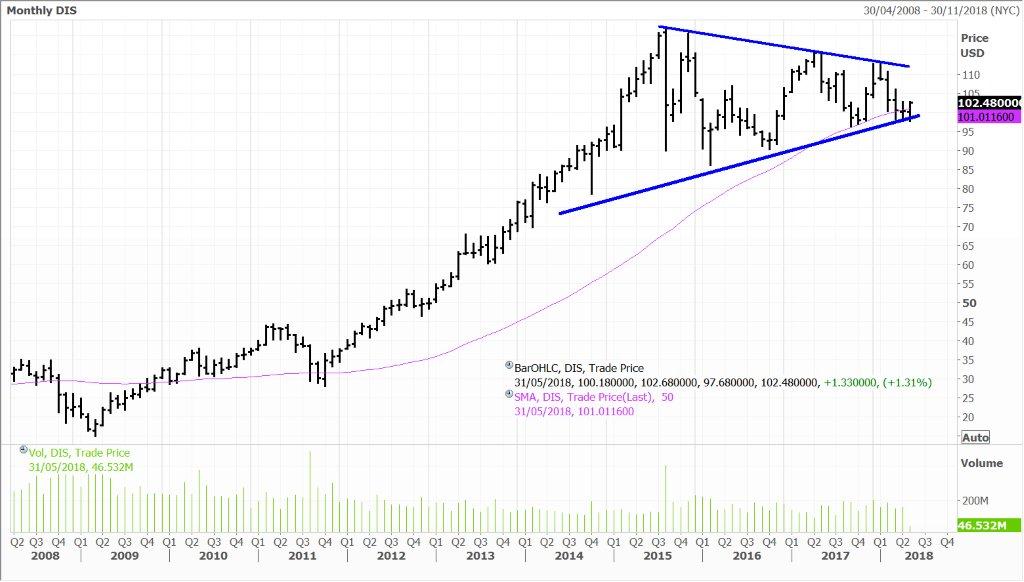 Spanish lender Caixabank announced it was increasing the majority shareholding in Banco BPI, a Portuguese bank. The bank will buy 8.4% of Banco shares from insurer Alliance. Caixabank, the third largest Spanish bank will pay €178 million or €1.45 per share. After the acquisition, the bank will own 92.935% of Banco BPI.

Caixabank intends to request the board of Banco to de-list its shares in the coming weeks. If the de-listing is approved by the general shareholders meeting then Caixabank will offer to buy all the remaining stock not owned at a purchase price of €1.45 per share in order to own 100% of Banco.

The price of €1.45 per share represents a premium of 22% over the volume weighted average price (VWAP) of the last six months. 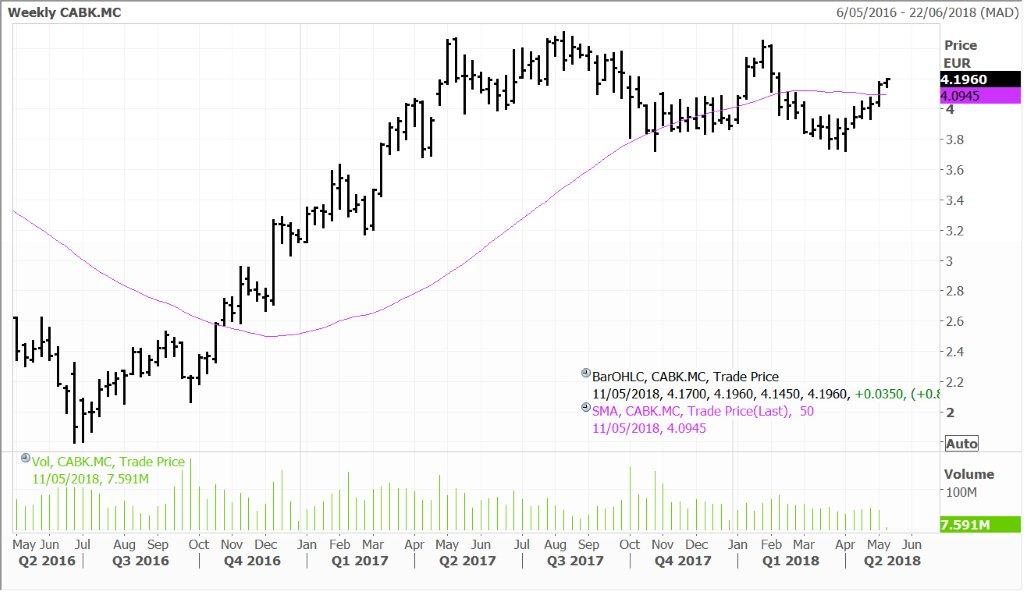