Wall Street’s major indices were all moderately lower on Wednesday due to the US/Russia tensions over alleged chemical weapon use in Syria and after President Trump threatened a missile strike. The White House is still weighing up its options. Geopolitical tensions pushed oil to the highest level since 2014 after Saudi Arabia reported it had intercepted an air strike over Riyadh.

President Donald Trump threatened missiles “will be coming” in Syria after a suspected chemical attack and a Russian ambassador said any US missiles targeting Syria will be shot down. Moscow denies that the Syrian government is responsible for the alleged chemical attack, but is an outlier in the international community on that front.

President Trump ramped up his threats, using his preferred tweet channel to say, “Russia vows to shoot down any and all missiles fired at Syria. Get ready Russia, because they will be coming, nice and new and ‘smart!’,” and also, “You shouldn’t be partners with a Gas Killing Animal who kills his people and enjoys it!”

White House noise aside, there were no new developments on the Mueller/Rosenstein issue, whereby Trump has threatened to fire the head of the Department of Justice in a bid to get at head of the FBI lead investigator Robert Mueller.

Any move by Trump to do so could instigate a constitutional crisis and invoke a response from Congress. This is perhaps the biggest near term uncertainty overhanging the markets at the moment, and any move by the Trump could potentially be very negative.

The White House legal team have apparently advised Trump against doing so, but I don’t think even the President would want to take on Congress over this issue. Either way, the markets will know in the next few days of any fallout on this issue. If the WH lets this one go, it could be very positive for sentiment given the chaotic state of affairs over the past several weeks.

Having said all that, the market’s overall reaction to Wednesday’s events was not too severe. The trading day was relatively quiet, characterised by low volumes with the Dow losing 0.90%, while the tech-heavy Nasdaq was down just 0.36% and the S&P 500 dipped 0.55%. Brent and WTI crude were the standouts making new medium-term highs rising 1.5% above $74 and $66 at one stage intraday. 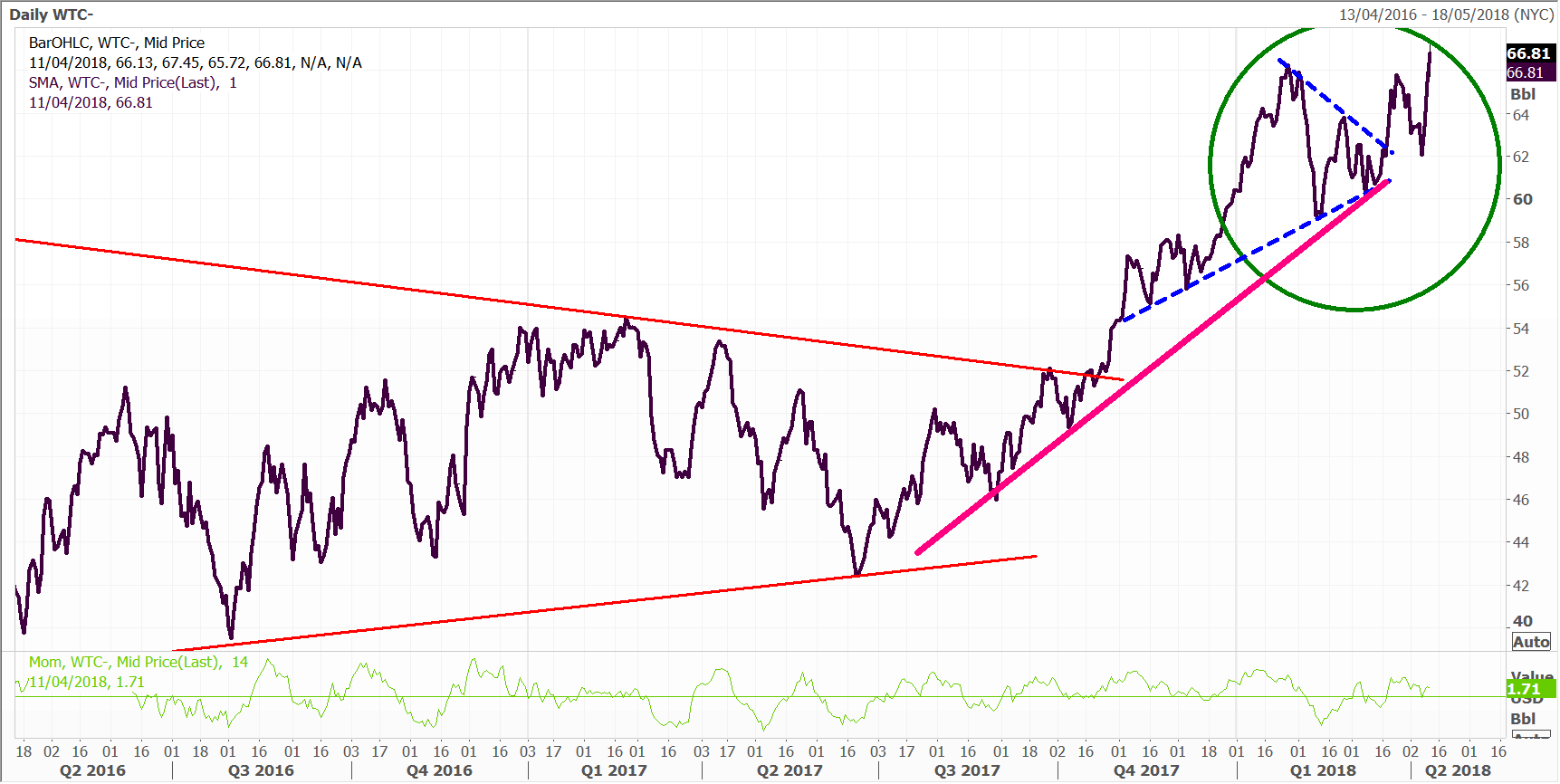 All eyes will soon turn to the US reporting season, scheduled to get underway tomorrow with the major banks due to release their results. Brokers have generally been quite upbeat about the March quarter and this should place the markets focus squarely back on valuation and the S&P500’s prospective 2019 multiple of around 15X.

On a day when most stocks across the major markets on the continent were in the red, automakers fared reasonably well on the cooling trade tensions between the US and China after Chinese President Xi Jinping’s speech earlier in the week. Volkswagen was up 1.4% and BMW edged up 0.2%.

The world’s biggest luxury goods maker LVMH added to its strong gains the day before, with another 1.5% increase on Wednesday. Italian air traffic controller group ENAV eked out a 0.4% advance. Banks across the region generally drifted down on the day, with Caixabank falling 1.7%, Credit Suisse down 1.0%, Credit Agricole dipping 0.4% and BNP Paribas slipping 0.7%. Bankia held its head just above water, ticking up 0.1%.

Vedanta Resources surged 5.4% on an improvement in production momentum at the end of the year, with 3% increase in fourth quarter gross production, even though full year production came in lower. BHP Billiton added 1.0% on a broker upgrade. Precious metals miners were boosted by hike in geopolitical concerns around Syria, with Randgold Resources up 2.6% and Fresnillo gaining 3.6%.

Amid individual movers, conglomerate Softbank gained 3.5% on news that its American telecom company Sprint was in resumed discussions to merge with T-Mobile. Robotics leaders Fanuc and Yaskawa Electric advanced on the back of the strong core machine numbers, gaining 2.0% and 2.4% respectively. Energy company Inpex rose 2.9%, supported by the strength in oil prices.

Touch screen technology expert Nissha Co, added 2.4% and leading air conditioning player Daikin Industries edged up 0.8%. On the financials side, Dai-Ichi gained 1.4% and the big banks Mizuho, Mitsubishi UFJ and Sumitomo ticked up between 0.2% to 0.4%.

Oil and gas major CNOOC surged 4.2%, while social media giant Tencent Holdings ticked up 0.6%. The Macau casino operators had a mixed day following on from strong gains Tuesday after a Deutsche Bank report upgraded estimates for mass market gaming as some new infrastructure will soon open. MGM China fell 3.3%, while Sands China was down 0.5% and Wynn Macau gained 3.2%.

In Australia the market was lower on Wednesday with the ASX200 falling 28 points to close at 5,826. The big four banks weighed on the index, although the resource sector was a bright spot. Stronger commodity prices saw the two big diversified miners well bid with BHP and Rio up 2% and 1.3% respectively. The decision of Trump to turn his attention from China to Syria/Russia though will make for a weaker start, with the ASX futures pointing to a 28-point decline on the open.

The resource sector had a good day yesterday, apart from South32 losing 2.3%, with the market reacting to the Columbian court ruling regarding the company’s Cerro Matoso nickel mine. The constitutional court overturned previous lower court decisions in favour of South32 in relation to environmental and health impacts to local communities. South32 last night confirmed it had applied to nullify the judgement, with the appeal process set to take up to eight months.

I think that this was something of kneejerk reaction by the market, fearing the worst. While financial penalties may be forthcoming, the continuity of mine operations is unlikely to be in doubt, and as I noted yesterday, the project having been in operation for over 30 years and is the world’s largest producer of ferronickel. The company’s efforts to ‘right the wrongs; and invest around $15 million in social and economic projects over the past three years should also cast it in a more favourable light.

This is while South32 has a fantastic collection of assets globally, and is significantly leveraged to our scenario of further strength in commodity prices. South32 also has one of the strongest balance sheets in the sector. We hold the stock in the managed account portfolios as well as the Global Contrarian Fund. 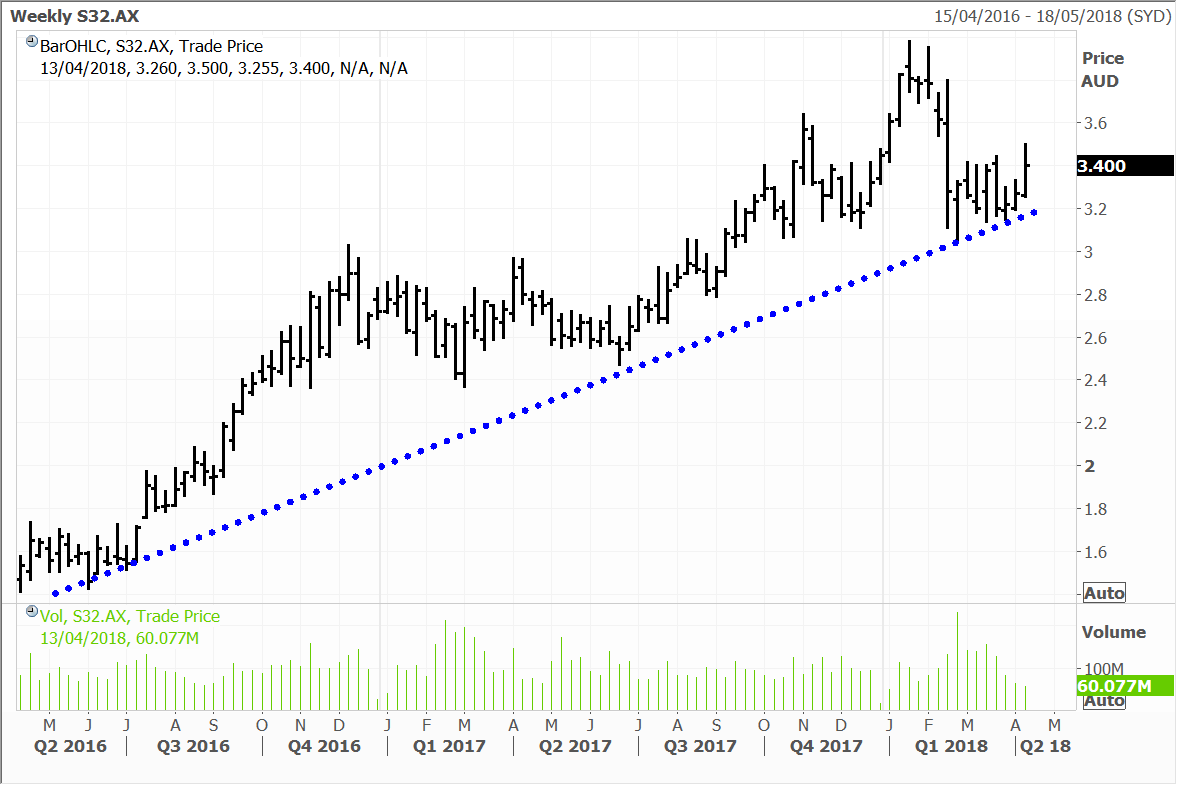 Chinese automaker Great Wall Motors announced that they will be working with technology giant Baidu Inc on self-driving vehicles. Baidu received the green light from Beijing in March to conduct tests with self-driving cars on 33 roads covering almost 105 kilometres around the lesser populated suburbs of the city.

The companies have been working together developing high-precision map and GPS technology since 2016. They will now also develop a platform for self-driving hardware and software. Baidu’s shares were down a little on Wednesday but this followed a 3.2% jump higher on Tuesday. Baidu is held in the Global Contrarian Fund and Global Opportunities managed account portfolio. 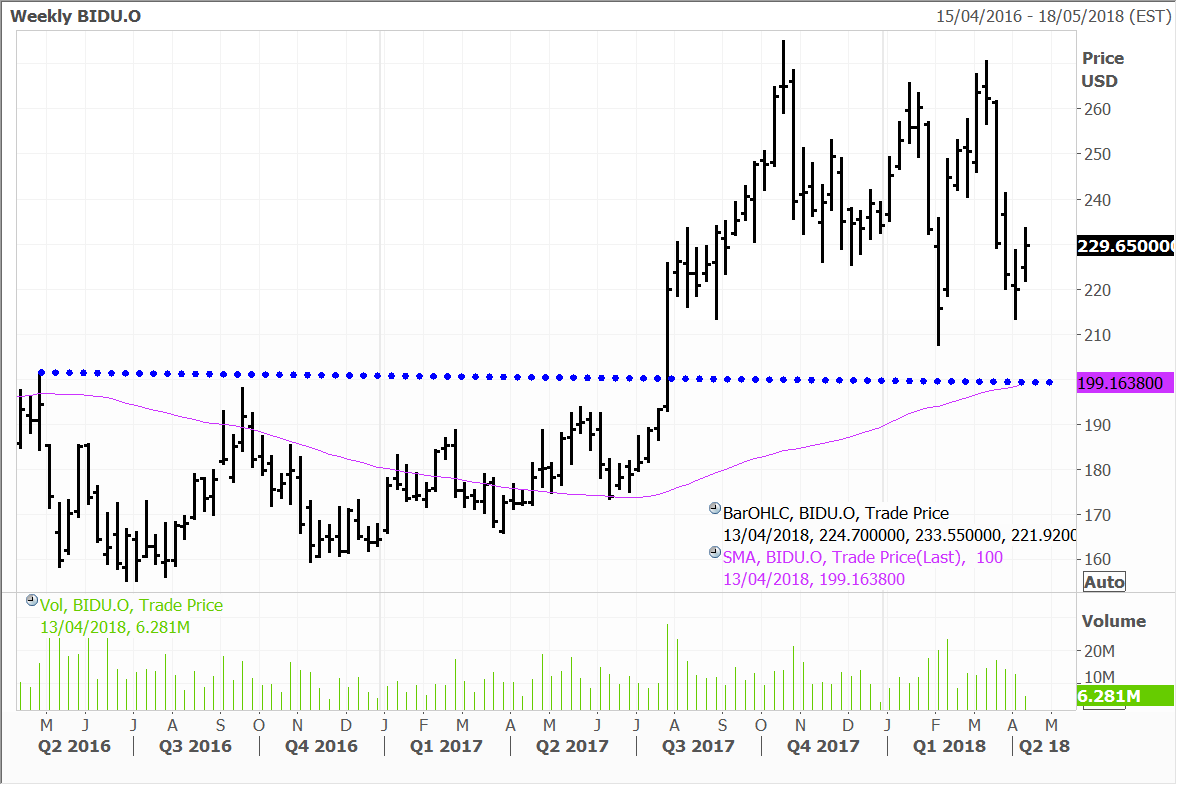 Japanese bank Mitsubishi UFJ Financial Group (MUFG) is planning to book a 50 billion yen (US$470 million) write down on the value of its branches as retail branch outlets are closed to reduce costs. The bank has over 500 branches in Japan and will announce their annual results in May. During the first 9 months they have earned 90% of a projected full-year profit of 950 billion yen.

Mitsubishi UFJ and its rivals have been reviewing domestic operations as profits diminish in an ultra-low interest rate environment. Nationwide branch networks have become costly to maintain and with technology advancing it has become unnecessary for physical bank visits. “Important thing is, customers do not have to visit physical branches, then we can smoothly reduce branches,” a MUFG official said. The company is aiming to cut the employee headcount by 6,000 over the next five years.

Rival bank Mizuho Financial Group is also planning on reducing 20% of their 500 domestic branches by end of 2025. They are looking at cutting 25% (19,000) employees in the next 10 years. Mitsubishi UFJ and Mizuho are held in the Global Contrarian Fund and Global Opportunities managed account portfolio. 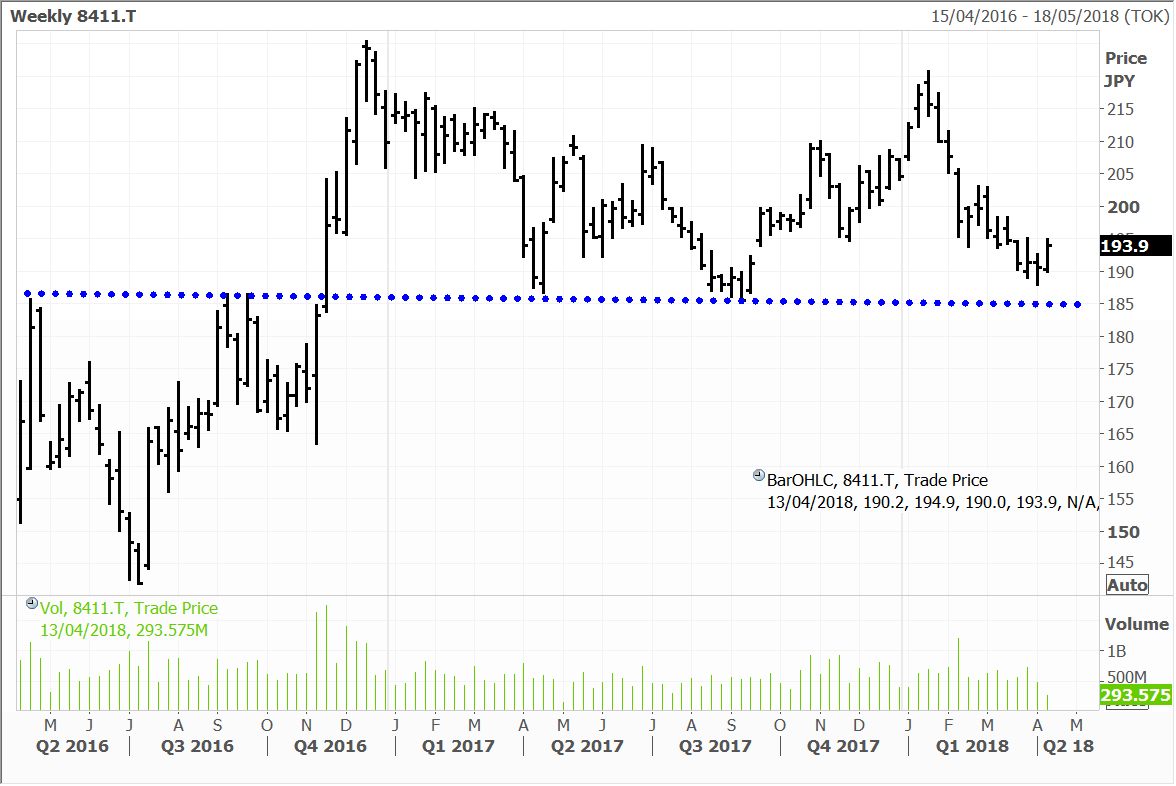 Walt Disney and Pixar Animation Studios have confirmed the release date for Toy Story 4. The fourth instalment of the franchise will premiere nearly nine years after Toy Story 3 on June 21, 2019. The original Toy Story was release more than two decades ago in 1995. The news was announced on Toy Story’s official Facebook page.

Few details have been released about the film, but it has been reported that most of the characters will return – Woody, voiced by Tom Hanks, Buzz Lightyear (Tim Allen), Bo Peep (Annie Potts) and Jessie (Joan Cusack).

If the numbers are anything to go by then Toy Story 4 should be a winner for Disney. Worldwide the franchise has had sales at the box-office of US$1.9 billion with each sequel doing better than the former. Toy Story 3 brought in US$1 billion, more than double the number for Toy Story 2. Disney is held in the Global Contrarian Fund and Global Opportunities managed account portfolio. 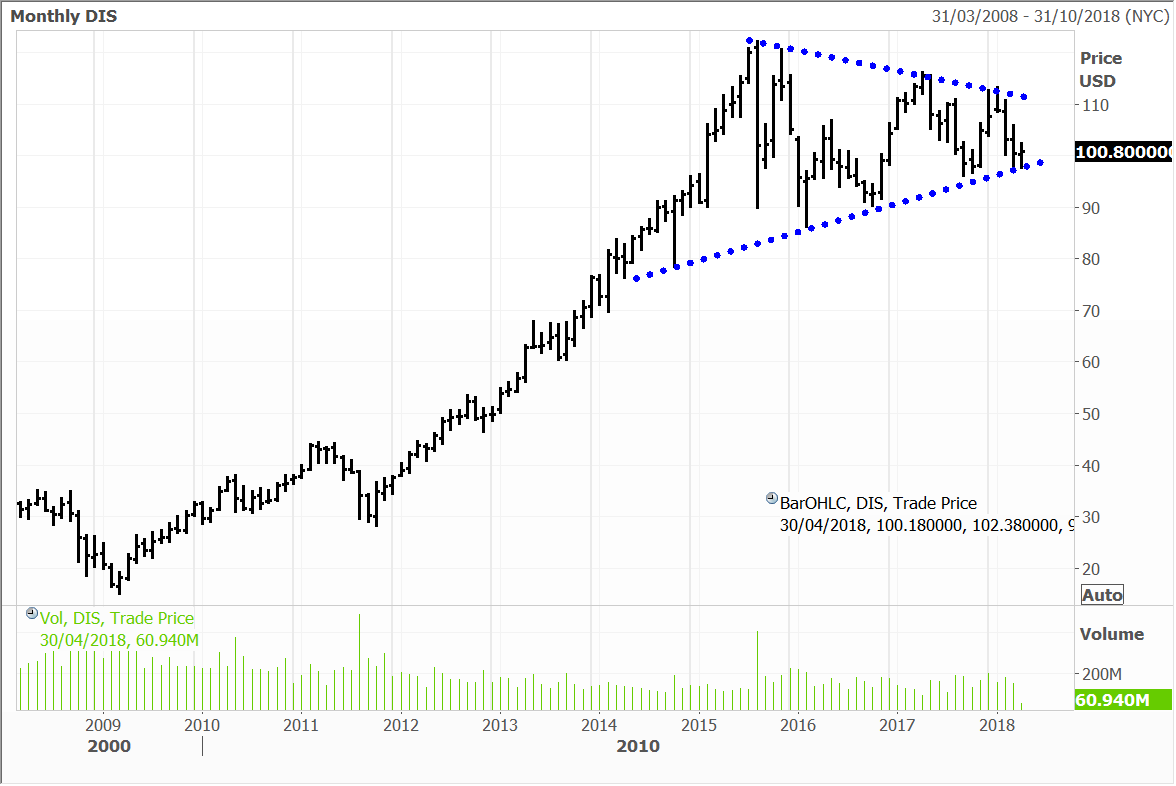