It was a relatively quiet day for the US stock indices, but in the foreign exchange market it was another thing all together. The US Dollar Index soared 1.22% on Thursday with the euro, A$ and pound amongst other currencies, all suffering as casualties.

What triggered the rally in the dollar and sell-off in the euro was a very dovish statement from the ECB – bond buying stimulus won’t be stopped now until 2019. What surprised during the session was that precious metals strengthened with gold pushing and holding above $1300, while silver rallied nearly 1% to push back above $17.

I have been writing in these notes regularly over the past few weeks that the US economy is in very robust shape, and we are in for a “powerful” June quarterly reporting season in terms of the US corporate sector, which gets underway in about four weeks’ time. JP Morgan revised their annualised GDP growth forecast up to 4% on Thursday, which compares to the likes of Morgan Stanley and other forecasts pegged at 2.75%.

I was really surprised at that revision! And I think this underpins my view that the US stock market is going to potentially take off in July – despite the typical seasonal lull when the Northern Hemisphere goes on holiday. Wall Street will recalibrate 2019 earnings estimates on the back of this, and the number could be well above the consensus at $175 EPS for the S&P500. A rising US stock market will provide lift for the rest of the world.

Legendary hedgie Paul Tudor Jones was on CNBC calling the risk of a “melt-up” in the second half of the year for US stocks. He was also vocal about not calling another “crash” although he did make comparisons with 1987 and 1999. PTJ made his name in 1987 when he called the stock market crash.

The US dollar index rallied over 1.2% against a basket of major currencies as the euro tanked, after the European Central Bank signalled that interest rate hikes were a long way off and that bond buying stimulus will not be withdrawn until 2019. This surprised the markets, with consensus expectations for more hawkish action.

The ECB will now reduce monthly asset purchases between October and December to $15bn until the end of 2018 and then conclude the program. German Bunds rallied, as did Italian and Pan European debt. However, this has now widened the US/European interest rate differential. Dollar bears were disappointed, and I think this points to further near-term strength in the greenback. 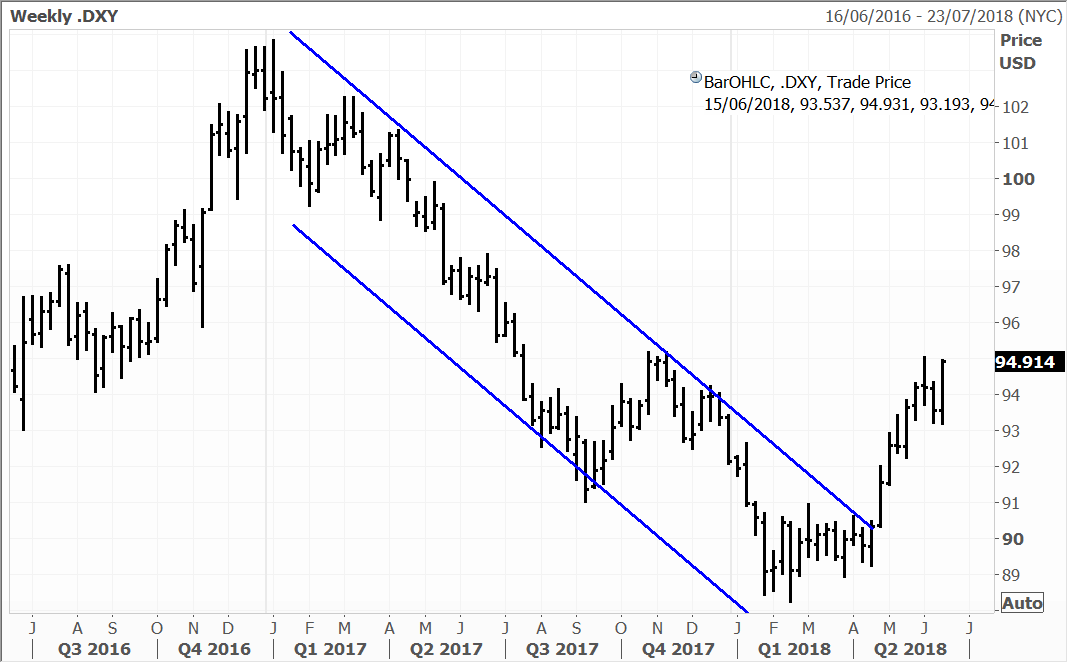 On the corporate front, shares of Disney, Fox and Comcast all gained. While markets have fixated on how much will be “paid for Fox” by Comcast or Disney, the really big story is that the US regulator has now “endorsed” industry plans to merge and rationalise, and fight back against the “disruptors’. This is going to underpin the biggest change in the US media landscape in decades. The 25% discount gap that Disney is priced on compared to the S&P500 has to close. 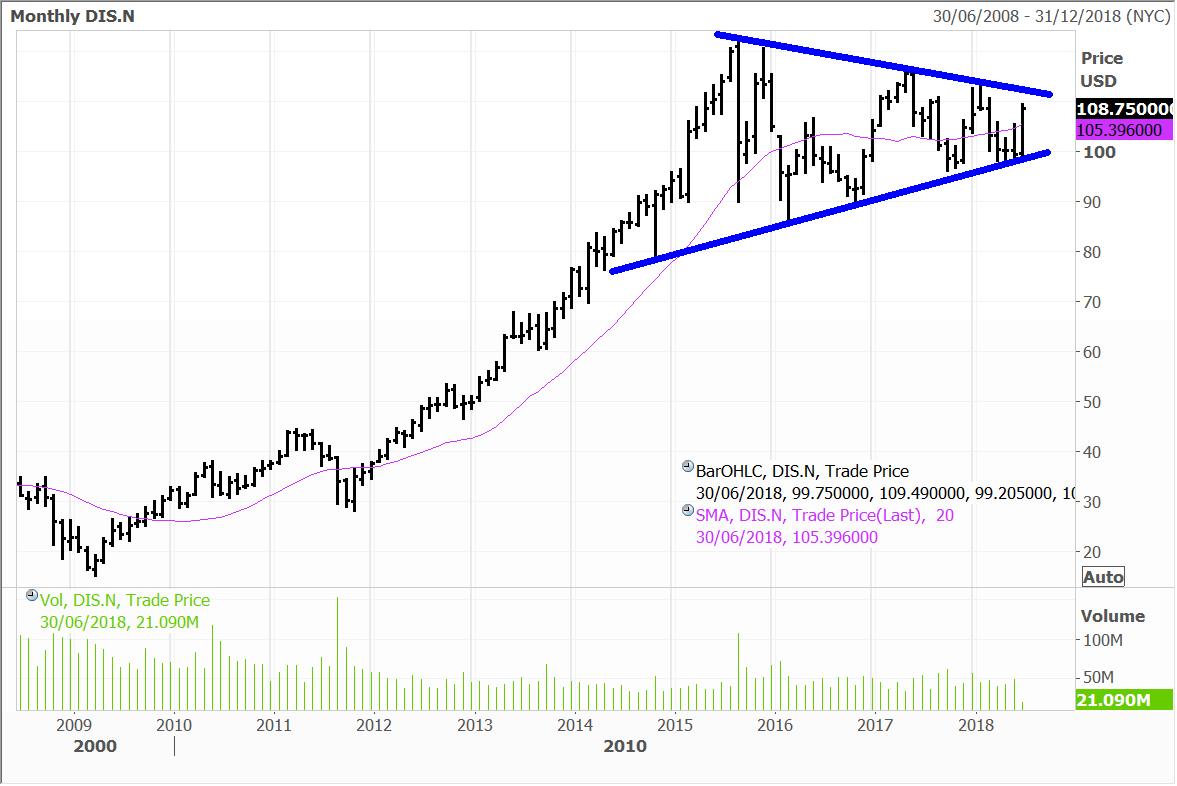 Comcast was one of the strongest mega-cap gainers on Thursday, rising 4.6%. The shares had earlier slumped as investors worried the company would overpay for Fox assets, particularly as it will be heavily indebted if its bid is successful. Indeed, if the value of the bid yesterday crystallised, Comcast would be the second most pro-forma indebted company in the US, after only AT&T (which received the green light from the courts for its Time Warner takeover this week). Still, investors seemed to be rethinking that view yesterday, as the Fox assets contain many gems.

Disney shares also rose, gaining 2.3% as investors wait on whether the House of Mouse will sweeten its offer for the Fox assets. The Fox assets are a far better fit within Disney so certainly there will have been some midnight oil burning in its corporate offices and those of its bankers recently.

But the markets are really waking up to the fact that the “old media industry” is going to now re-organize and fight against the disruptors. Like the Allies coming together in World War II, the fight is now truly on. The markets are beginning to recognise that. The heavily discounted sector is not going to be “priced as such” for much longer.

Back to Fox, should Disney not step up and take another swing, it stands to receive a $1.52 billion break fee, which Comcast has agreed to pay on Fox’s behalf. Another option is that Disney can still negotiate with Comcast for certain Fox assets. That could help smooth the way for a Comcast bid to go through and reduce the cost. Everyone would walk away with a prize.

And let me be specific about this – what was interesting about the US Department of Justice approval of the AT&T merger with TWX is that it is transitional. The decision is not just about a “fight” between Comcast and Disney over Fox, but actually more about the “old media industry” rallying against the disruptors.

The topical Italian and Spanish markets both gained, with their benchmark indexes up 1.22% and 0.59% respectively. In Milan trading luxury retailing giant LVMH and air traffic controller ENAV both outperformed, up 2.2% and 1.9% respectively.

In Frankfurt, Volkswagen shares advanced 1.8% as German prosecutors levied a €1 billion fine on the company in relation to its emissions scandal. Investors took heart that the German auto giant is nearing the end of its financial exposure to the scandal.

Stocks in London generally closed higher on Thursday and the benchmark FTSE 100 index gained 0.81% as the ECB decision on interest rates and dovish tone saw the Euro and the Sterling fall.

The major Asian indexes finished mixed in the red on Thursday with trade war concerns and a slightly more hawkish sounding Fed weighing on sentiment. In Japan, the benchmark Nikkei index lost 0.99% with exporters and mining-related stocks feeling the most heat. Shipping stocks bucked the overall downward trend after the Baltic Dry Index (BDI) rose.

Final data from the Ministry of Economy, Trade and Industry showed Japan’s industrial production increased 0.5% month-on-month in April, which was a pick-up in pace from earlier estimated 0.3% increase. April marked the third straight monthly rise.

Exporters falling on the day included the likes of robotics leaders Fanuc and Yaskawa Electric and electronics and entertainment conglomerate Sony, down 1% to 2.2%. Local energy giant Inpex fell 2.2% as oil prices eased. Going against the grain in a positive manner was touch screen technology expert Nissha Co, up 1.4% and the bank stock Resona Holdings (+2.5%). Video game developer and publisher Square Enix was a strong gainer, rising 4%. Toshiba tacked on another 2.7% gain following its recent share buyback announcement.

Investors continued to take profits on Nintendo after its presentation at the Electronic Entertainment Expo (E3) in the United States underwhelmed, although to be fair, expectations were high. The stock slipped another 5.1% on Thursday.

Chinese industrial production, retail sales and fixed asset investment data disappointed on the day. Industrial production grew 6.8% year-on-year in May, falling short of the 7.0% expected. Fixed asset investment was up 6.1%, below the forecast for 7.0%. Retail sales increased 8.5%, although missing the projection for 9.6% growth and slowing from the 9.4% pace seen in April.

The big Australian resource stocks were in positive territory yesterday and I continue to believe that there is further to go on the upside medium-term. Particularly if we are right (and in contrast to some broker views this week) that prices for iron ore, copper and the like are going to remain high. As we have seen with the GDP and jobs reads, a healthy resource sector is a good thing. What I also appreciate is that the sector is not getting carried away, but continuing to invest selectively. BHP has just approved a US$2.9 billion spend on a new iron ore mine in the Pilbara. South Flank will begin production in 2021 and deliver 80 million tonnes of iron ore per year.  If we are right on China, there will be plenty of appetite for this.

Volkswagen shares advanced 1.8% In Frankfurt trading on Thursday as German prosecutors levied a €1 billion fine on the company in relation to its emissions scandal. The company is nearing the tail end of its financial exposure to the scandal and the fine is a drop in the bucket compared to what the automotive giant has already settled in the United States.  Sales volumes across the group hit a record level in the first quarter of 2018.

Volkswagen shares have performed solidly of late, with the market shrugging off an unexpected fall in first quarter operating profit for giant German automaker Volkswagen when it reported in late April, as this was largely due to an accounting quirk with a change in the reporting of the value of derivatives. Investors were reassured by solid underlying numbers showing the company’s turnaround since the ‘Dieselgate’ scandal broke in 2015, remains on track.

Given the still modest valuation, scope for cost reduction in the traditional business, strong cash flows and liquidity, shrinking provisions for the diesel emissions scandal and the promising push into electric cars we are positive on the name.

Volkswagen’s traditional drivetrain business has bounced back well after the diesel scandal and provides a strong base the company is planning to leverage to aggressively pursue the Electric Vehicle market opportunity. At the end of the March, the Automotive division had €24.3 billion in net liquidity and the division’s net cash flow in the quarter was €2.4 billion.

Earlier this year Volkswagen management announced a major push into the electric vehicles market over the next five years. Under “Roadmap E” Volkswagen has outlined plans for 16 production sites for electric vehicles (EVs) by the end of 2022. The group currently produces EVs at three locations and in two years’ time another nine plants are scheduled to be equipped for this purpose. To ensure adequate battery capacity, deals have been inked in Europe and China and a similar supplier decision will be made in North America shortly.

The Volkswagen Group posted record total unit deliveries of 2.68 million for the quarter, up 7.4% from a year earlier. This was driven by passenger cars, which were up 7.9% to 2.51 million units, while commercial vehicle sales were effectively flat at 167,927 in 1Q18 compared to 167,742 a year earlier. The company’s namesake Volkswagen brand saw deliveries increase 5.9% to 1.525 million.

Importantly for the group, Audi sales exhibited continued strong growth, with unit deliveries increasing 9.8% to 463,788. Porsche sales were also solid, rising 6.3% to 63,478 units. Because of high price tags and margins, these two latter brands account for an outsized portion of group profits relative to their percentage of group sales. Indeed, combined the Audi and Porsche businesses accounted for a little over half of operating profit in the quarter. Volkswagen is held in the Global Contrarian Fund. 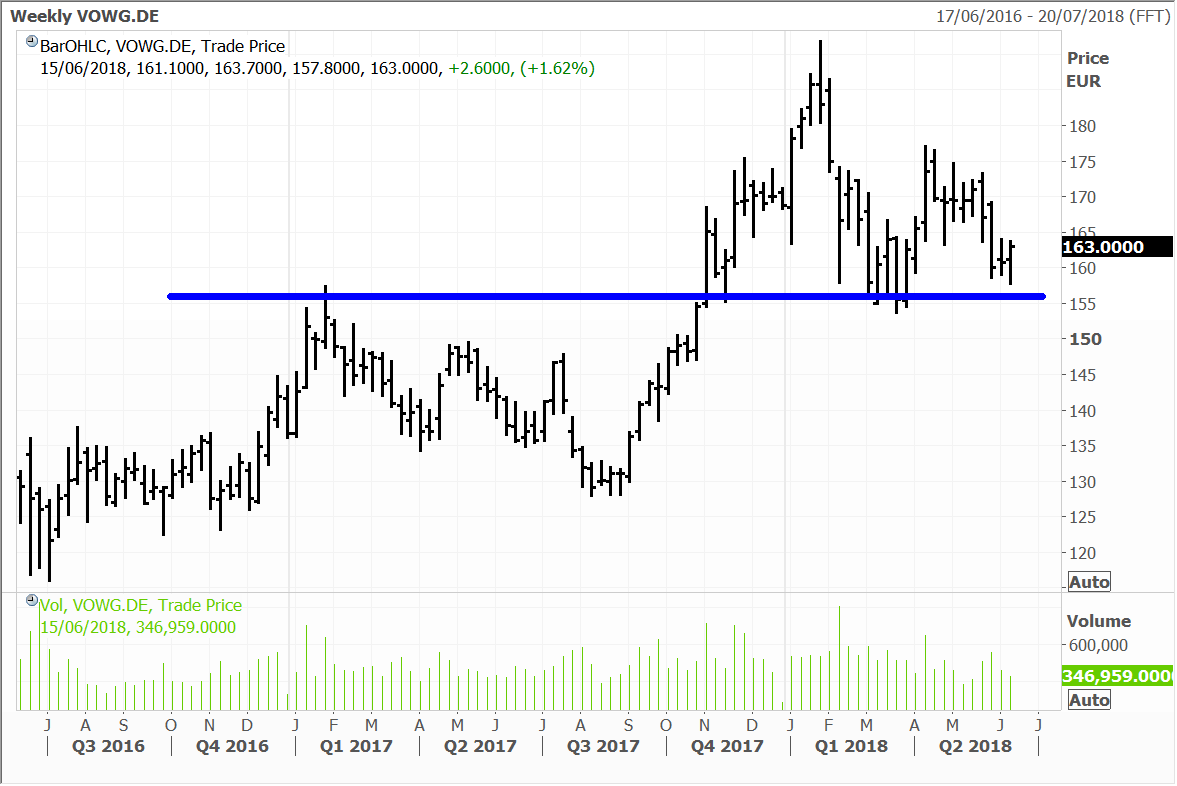